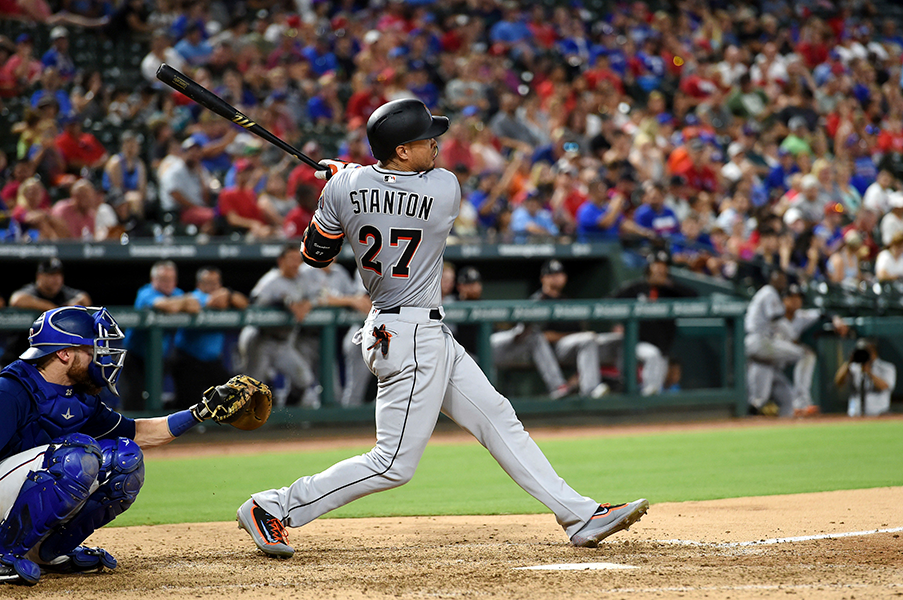 Sources say that while other trade options involving other teams keep drying up, the Miami Marlins have continued to talk about a possible trade for Giancarlo Stanton with the New York Yankees, as the Marlins try to find ways to lower their debt.

Stanton is to be paid $295 million over the next decade, and any trade involving the Yankees would be complicated for the team and would likely include Jacoby Ellsbury, the current Yankees center fielder who through 2020 is owed over $68.4 million, and like the Marlins’ Stanton has a no-trade clause in his contract.

According to several sources, Stanton will listen to proposals for a trade involving the Yankees.

Stanton has already vetoed trades the Marlins had set up with the San Francisco Giants and the St. Louis Cardinals, as he declined to waive the no-trade clause in his contract.

The involvement of the Yankees could also give Miami some leverage in talks with the Dodgers, who most believe is the team Stanton most prefers to play for.

Earlier this offseason, New York thought any deal to obtain Stanton was out of the question for them, given the concerns on luxury tax and early demands by the Marlins.

However, as the control of the process by Stanton has manifested due to his no-trade clause, ending any possibility of deals with the Giants, Cardinals and other MLB teams, the Marlins and Yankees re-established talks earlier in the week.

Miami, under the new ownership led by Derek Jeter, has spent the last five weeks trying to deal Stanton.

Jeter and Bruce Sherman took the franchise over for $1.2 billion from former owner Jeffrey Loria, and are now saddled with large debt.

They traded Dee Gordon on Thursday to eliminate one large salary. Gordon was still owed $37 million through 2020 by the Marlins.

The Marlins had negotiated deals with both the Cardinals and Giants but each of the clubs said on Friday that when the time came to finalize a deal, Stanton refused to agree and did not waive his no-trade clause.

The Giants said the deal they had with the Marlins could not be finalized and that Stanton and the Marlins were exploring more options they have.

Cardinals CEO and Chairman Bill DeWitt Jr. said the team also has a deal finalized to acquire Stanton, subject to the slugger waving the clause, but Stanton opted not to.