Baseball Players Down Time and Gambling 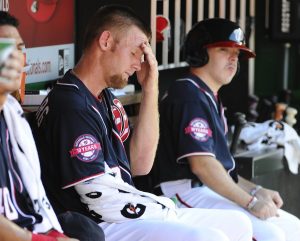 When they aren’t on the field, many baseball players have been caught (apologies for the pun) at the table enjoying a game of poker. And who can blame them? The fast-paced game is the ideal mental workout for professional athletes, as well as a great way to blow off some steam and win some money in the meantime. Anyone can play poker and there are loads of opportunities to get stuck in both in real life and online, with sites like 888 Poker offering an excellent selection of games for both beginners and seasoned sharks.

Although baseball players are some of the highest paid sportsmen in the world, it hasn’t stopped a few big names from going on to enter professional tournaments, showing that poker isn’t just about the money. Former LA Dodgers pitcher Orel Hershiser may have had a successful career throughout the 80s and 90s (apart from an unwanted record), but that didn’t stop him from trying his hand at pro poker, becoming a regular on the tournament scene and even managing a 5th place finish at the NBC National Heads-Up Poker Challenge in 2008 which saw him walk away with £75,000.

For the average baseball player however, it will be the long road trips and waiting around in club houses both pre and post-game that will be the hotbeds of friendly poker. Former Major League player John Burkett gave a candid report of the popularity of poker between players, both as a social event and way to develop mental processes and the ‘mind games’ used in baseball. The two-time all-star jumped into the poker scene himself following Chris Moneymaker’s huge World Series of Poker Main Event win in 2003.

Although there are some talented baseball players that have gone on to become professional poker players, including former Gannon University pitcher Matt Berkey who swapped the mound for the poker table and now has over $3 million in tournament winnings, there are some players who take a more benevolent approach to poker. In January this year, the MGM Grand held a charity event for the Players Trust, a foundation put together by the MLB Players Association, hosted by Nationals outfielder Bryce Harper and Cardinals outfielder Dexter Fowler. Danny Farquhar walked the tournament, with other big names at the event including Barry Bonds, Bobby Bonilla, Brad Boxberger, J.T. Chargois, Eric Davis, Steve Trachsel, Kenny Lofton and Royce Clayton.

It seems that the two sports definitely have a lot of links, so it will be interesting to see whether poker can transcend to the next generation of pro baseball players. In the meantime, there are plenty of poker and baseball events to enjoy at the moment, with the regular baseball season in full swing and some big summer poker events like the WSOP main event just around the corner.

Winmark Upgraded to “B” at TheStreet