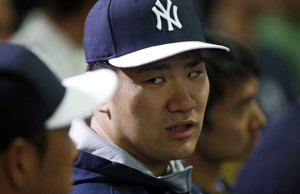 Before Monday’s game against the Los Angeles Angels, New York Yankees pitcher Masahiro Tanaka had been struggling, leading many to believe he would eventually get sent to the bullpen if he snap out of his funk soon.

After giving up a homerun in the first inning, a lot of Yankees fans and baseball pundits thought New York was going to be in for another long night thanks to Tanaka’s struggles. However, Aaron Judge put all those worries to bed with two homeruns on the night, including the game-winning two-run homerun in the eighth inning.

While Judge deservedly got a lot of the acclaim for the 5-3 win, Tanaka was also instrumental with one of his best games of the year. Even though the Angels were without MVP Mike Trout, who is on the DL, Tanaka did a good job against a lineup that included Albert Pujols, who belted his 600th career homerun a few days before the meeting.

After allowing the first inning homerun, Tanaka held the Angels at bay for most of the rest of the game. He went on to throw 6 2/3 innings after that and allowed only one earned run while striking out eight batters.

For the night, Tanaka threw 89 pitches, and also made a great defensive play on a bunt that left the Yankees feeling good about his outing, and hoping for more of the same as the season progresses.

Manager Joe Girardi to reporters that he felt Tanaka’s control and velocity were great, and he feels it is something Tanaka can build on.

Before Monday’s game, Tanaka had a 2-5 record in his last seven starts, with an 8.50 ERA. Opposing batters were very successful hitting Tanaka, and had a .335 batting average against the pitcher.

Tanaka’s numbers before Monday’s game were the worst of his career, which led many to speculate his age was finally catching up with him despite finishing last season with a 14-4 record and a 3.07 ERA.

Girardi was so impressed by Tanaka on Monday that he called the performance better than the 13 strikeout outing he had against the Oakland Athletics in May. Despite Tanaka’s pitching woes this season, Girardi believes the performance against the Angels will help boost Tanaka’s confidence, which should help him pitch better down the line.

Yankees shortstop Didi Gregorius, who finished 4-4 at the plate on Monday with 2 RBIs, would probably have been the player of the game on Monday if it wasn’t for Judge and his two-homerun performance.

At this point, Judge is leading the league in homeruns and RBIs, and is already one of the front runners for the MVP award. If the Yankees continue hitting the ball well and maintain their pace for the rest of the season, they will be the team with the best betting odds to win the World Series this year.

Judge, who has been the biggest surprise in the league this season, is not letting all the hype get to his head. After the game, while answering questions, Judge credited Tanaka for the win, and said it was fun to watch the Japanese pitcher work when he is on his game.