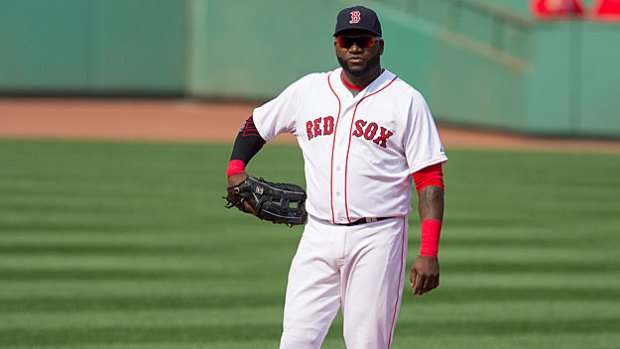 Perhaps a sign that Father Time has tracked him down, David Ortiz is having his worst season to date since joining the Boston Red Sox before the 2003 campaign. On Sunday, that did not prevent manager John Farrell from starting the likely future Hall of Fame designated hitter at first base for the first time in a non-interleague game since 2006. It was an appearance that saw Ortiz make Major League Baseball history.

According to Elias Sports, Sunday’s game against the Houston Astros at Fenway Park marked the first time in Boston’s 17,867-game history that a Red Sox first baseman did not record a putout.

There were two ground ball outs in the game that was won by the Red Sox, 5-4. During one of the outs, Ortiz fielded a grounder and flipped to starting pitcher Eduardo Rodriguez, who tagged first base. Jake Marisnick made the other out when he was called for batter’s interference on a bunt attempt.

Every other out was recorded via strikeout, fly out or line out.

That Farrell penciled in Ortiz at first base reflects the depth of Mike Napoli‘s struggles at the plate. Napoli, who will be a free agent at season’s end, has 10 home runs, but he is hitting just .192 with a .652 OPS and 78 strikeouts in 299 plate appearances.

Now 39, Ortiz has 14 home runs, but he is batting only .228 with a .744 OPS in 324 plate appearances. Yet Farrell opted to play the DH in the field, where he is adequate but not spectacular.

If Napoli continues to struggle, his spot at first base will not be filled by Ortiz, Farrell said. The Red Sox could summon Allen Craig from Pawtucket, though the former National League All-Star is slumping there after hovering around .300 for much of the season. Another option is the versatile and reliable Brock Holt. Currently stationed at second base while Dustin Pedroia recovers from a hamstring strain, Holt could move to first when Pedroia returns from the DL either this week or after the All-Star break.

The left-handed hitting Holt could play first base against right-handed starters while Napoli could fill the spot when a left-handed starter in on the mound. In the latter scenario, Holt would play another position since he is now a regular in the lineup.

Red Sox general manager Ben Cherington has told the media that he is searching the trade market for young starters and relievers who are under team control beyond next season. As long as the Red Sox continue to win – they are 11-6 since losing seven in a row and are six games out of first place in the mediocre American League East – Cherington could add a first baseman to his “to do” list as the July 31 non-waiver trade deadline nears.