New York Yankees Made the Smartest Decisions This Winter 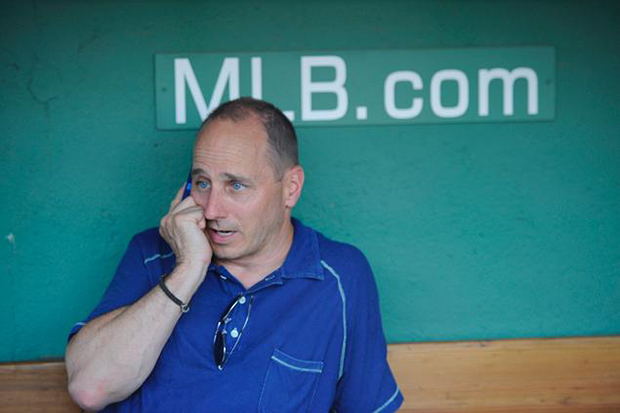 With pitchers and catchers due to report this weekend and James Shields firmly planted on the Padres’ roster, the majority of the heavy and impactful lifting is complete for the 2015 winter. The New York Yankees used the past three-and-a-half months trying to get younger, trying to sure up the defense, trying to cover both holes on the left side of the infield, trying to sort out the second base competition and trying to rebuild some of the innings lost with Hiroki Kuroda‘s departure.

It was a long to-do list to not only maintain what amounted to a second place and 84 win team last season, but to try to improve it, possibly as far as 5-10 wins to return to the playoffs in the Bronx for the first time since 2012. While it’s unclear and, quite frankly, still a long shot the Yankees will be playing deep into October, New York did make the best decisions possible this winter, in a new but consistent effort to build a perennial contender in the future.

Brett Gardner, Jacoby Ellsbury, Masahiro Tanaka, Michael Pineda and Dellin Betances, arguably the top five most important players for the future core of the Yankees, are all locked up for a long time (at least three years each). Certainly enough time to build around them in a suddenly vulnerable and open division.

The Yankees could have spent on players like Hanley Ramirez or Pablo Sandoval to rebuild a left side of the infield and middle of the lineup, but they didn’t, instead opting to hold onto the 16th and 30th overall picks and  signing Didi Gregorius and Chase Headley as alternatives. Though it’s fair to hold skepticism on Ramirez and his position change and ability to stay healthy and Sandoval’s weight and dwindling regular season stats, the Red Sox saw an opportunity to boost offense immediately and the Yankees saw an opportunity to get younger and build a steadily improving farm system.

Both were probably the right decisions for the rivals.

Gregorius is a worthy risk. He is a proven glove (immediately adding an element at shortstop only a few times seen over the past decade for the Yankees) and a risky bat. Many will wonder if his bat is everyday caliber, but many forget to compare him to a 40-year-old Derek Jeter, factor in all of the runs he will save and add in the element Gregorius is not yet in his prime.  To be able to take a flyer on him, sell high on Shane Greene and not have to give up guys like: Aaron Judge, Luis Severino, Gary Sanchez, or Rob Refsnyder for an injury prone superstar like Troy Tulowitzki was the right decision, and a different one from what we’ve come to expect.

Instead of signing Robinson Cano for more than $180 million last season and letting him go to the Seattle Mariners, the Yankees opted instead to try to patch up second base while also keeping an eye on development. Now the franchise is in a situation where it can splurge on Yoan Moncada and immediately add a top 15 prospect to its farm (and a third top 100 player), or it can rely on Rob Refsnyder or Jose Pirela to pan out, or it can see if Stephen Drew, the player New York instead signed, can harness some of what made him a solid every day option as recently as 2013. The Yankees aren’t one bat away from being a juggernaut and they know it, instead opting for a cost-controlled, long-term option and buying themselves time with a respectable alternate option.

Instead of signing players like the aforementioned Sandoval or Ramirez to play third, the Yankees instead set their sights on less years, less dollars, and a concentration on defense and OBP, two things they were among the bottom of the league in last season. Chase Headley was the final decision and he offers both, plus his contract will expire before his 35th birthday.

The Yankees could have gone after another long-term, big money, contract in the rotation by signing James Shields or Max Scherzer but instead opted to again sell high on a nice piece but not a difference maker, when it sent Martin Prado to the Marlins for Nathan Eovaldi. The Yankees also sent David Phelps, a fifth starter and reliable swing-man of sorts, on his way but also acquired a promising young pitching prospect and a capable backup first baseman, something sorely needed to address the too-quiet issue of Mark Teixeira‘s health.

It was a classic sell high, buy low because if the two centerpieces reach their ceilings over the next few years, the Yankees will win this trade many times over. It’s the sort of move which can’t cripple a team, but can be reflected upon as an important acquisition should it go the right way.

Now the Yankees don’t have a second potential CC Sabathia on their hands, but do have: Tanaka, Pineda, Eovaldi and Ivan Nova with Nova due to return the beginning of June. Four arms with multiple years left on their contracts and all under the age of 30. In a landscape cruel to those searching for power arms or bats, the Yankees have set themselves up for an abundance of arms now and in the future.

So did the Yankees turn themselves from mediocre to elite? No, but that was never the plan in one winter. Not when you consider how old, broken down and lost this franchise was as recently as 2013. With Jeter gone, Cashman has retained artistic command and immediately changed the culture of the roster. He’s positioned the payroll in a place where while the Yankees are still expected not to be taken seriously (2015), the payroll is still bloated. The difference is they will lose at least one heinous contract every year afterwards, creating a constant flow of disposable money to supplement the roster with better investments.

The farm system will receive major boosts with an international spending spree (set to make a big impact this year), two first round area picks and all the top prospects still under the same roof. It’s a perfect storm for this particular franchise, who could be looking for a couple of major bats around the same time the rest of the roster falls into place, with young and powerful arms, a sturdy bullpen (and long-term late inning relievers) and the right guys signed to long-term deals, depth coming up and the wrong guys falling off the books left and right.

This winter didn’t make the Yankees World Series winners, but it should scare every other team in the game just the same.