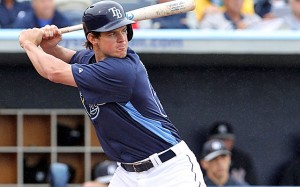 The Tampa Bay Rays sent outfielder Wil Myers to the San Diego Padres as part of a three team trade that involved 11 players. Myers heads to San Diego as the centerpiece of the trade.

San Diego also receives young minor league arms Gerardo Reyes and Jose Castillo along with big league catcher Ryan Hanigan as part of the deal. Meanwhile, Tampa Bay will get catcher Rene Rivera, right-hander Burch Smith and first base prospect Jake Bauers from the Padres. In addition, the Rays get outfielder Steven Souza and lefty pitcher Travis Ott from the Washington Nationals, who receive righty Joe Ross and recent draft pick Trea Turner from the Padres by way of Tampa.

This is a complicated deal, but the big piece is Myers. The Rays acquired him from the Kansas City Royals along with Jake Odorizzi prior to 2012 in exchange for James Shields and Wade Davis. A consensus top five prospect, Myers had a solid rookie campaign, batting .293/.354/.478 in 88 games and posting more than +2 WAR. However, he struggled with a wrist injury in 2014, and batted just .222/.294/.320 in 87 games. Myers has struck out in nearly a quarter of his 734 career big league plate appearances, and he’s posted high strikeout rates in the minor leagues as well.

If his wrist injury is fully healed and the power he’s displayed in the minor leagues shows up, Myers should be a very strong player. Without the power, he’s more of an average to above-average player rather than a potential star. Steamer projects a .251/.327/.418 batting line for Myers with +2.5 fWAR. He recently turned 24, so there’s time for him to realize his potential, but a disappointing 2014 season has taken some of the shine off his top prospect status.

Steven Souza doesn’t have the same prospect billing as Myers but he’s had his way with minor league pitching. Last season he batted .350/.432/.590 in 407 plate appearances in Triple-A. He had a brief stint with the Nationals. Steamer likes Souza nearly as much as Myers, so from at least one point of view the Rays aren’t downgrading. There’s reason to doubt this projection, as Souza has all of 26 major league plate appearances.

Hanigan, whom the Rays traded for last offseason, is a strong defender and receiver who consistently posts low strikeout rates. He doesn’t make a whole lot of solid contact though and the 34 year-old owns a career slash line of .256/.353/.341. The 31 year-old Rivera had a strong 2014 season, knocking 11 home runs in 329 plate appearances and batting .252/.319/.432. Prior to that he had never received more than 114 plate appearances in a season. Like Hanigan, Rivera is a strong defender and receiver.

Most of the remaining players in the deal are a long way from the major leagues. Right-hander Burch Smith flashed some swing and miss stuff in 10 appearances with the Friars in 2013, but had issues with the long ball. A forearm injury held him to just 11 minor league appearances in 2014.

Trea Turner was a standout shortstop at North Carolina State, and he was selected with the 13th overall pick by the Padres last June. He possesses elite speed and the glove and arm required to stay at shortstop. There are definitely questions about his ability to hit big league pitching, but with the defense and speed, there’s a low bar for him to be a useful major league player.

The Padres are shaking things up. This is the second major trade they have been involved in as they sent Matt Kemp to San Dieg last week. With their current glut of outfielders, expect them to make more moves before the offseason is over.

Head to Head Survey: Surge Components vs. Its Rivals

Energizer Price Target Cut to $32.00 by Analysts at Morgan Stanley