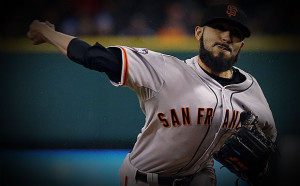 The San Francisco Giants have re-signed reliever Sergio Romo, reports Ken Rosenthal of Fox Sports. Romo will receive two years and $15 million. It’s the first significant move of the offseason for the Giants, who were unable to bring back free agent third baseman Pablo Sandoval and lost out on the bidding for Jon Lester.

The 31 year-old Romo has served as the Giants closer over the past three years. Prior to that he worked as a devastating back-end reliever. Romo made 133 appearances between 2010 and 2011 and authored a 1.88 ERA with a shocking 40 percent strikeout rate in 2011.

Romo took over the closing job partway through the 2012 season and posted a dazzling 1.79 ERA with 14 saves in 69 appearances while striking out 29.3 percent of hitters. Romo added four more saves in the postseason and allowed just one run in 10 appearances, as the Giants were World Series victors.

Romo notched 38 saves in 2013 though his ERA rose to 2.54 and his strikeout rate dipped to 23.2 percent. He lost the Giants closing job partway through the 2014 season, as he struggled to an ugly 4.74 ERA in the first half of the season. The Giants reliever had much better results in the season’s second half, as he allowed only four runs in 20 innings with 23 strikeouts and only three walks. During the playoffs he gave up only one run in nine outings, as the Giants were World Series champs again.

Romo doesn’t possess typical closer stuff. His fastball sits in the upper 80s. He relies heavily on a sweeping slider, which he’s thrown on nearly 50 percent of his pitches over the course of his career. That’s allowed him to manage a career swinging strike rate of 13.6 percent. It also fits in well with a Giants bullpen that has tended to rely heavily on offspeed pitches rather than high velocity fastballs. Since 2010, only three teams have a lower average fastball velocity than the Giants relief corps.

As a former 28th round draft pick in 2005, Romo has made a very nice career for himself. He’s been with the Giants for seven big league seasons over which he has posted a 2.51 ERA in 405 appearances with a 28.4 percent strikeout rate. By signing with the Giants he will get himself a nice raise from previous arbitration salaries while maintaining a level of comfort with the team that drafted him.