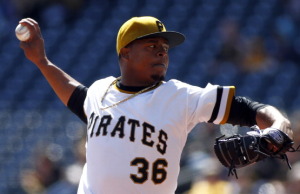 The Kansas City Royals have agreed to terms with free agent pitcher Edinson Volquez on a two-year deal worth $20 million reports Jon Heyman of CBS Sports. Volquez spent last season with the Pittsburgh Pirates who picked him up on a one-year deal after he spent 2013 with the San Diego Padres and Los Angeles Dodgers.

Volquez did experience something of a comeback season in 2014 as he authored a 3.04 ERA with the Pirates. However, his underlying numbers showed little or no improvement from prior years. His strikeout rate dipped again, this time to 17.3 percent, and his FIP and xFIP were basically the same as in the 2012-13 seasons. Though he pitched to a 2.20 ERA in the season’s second half, his xFIP sat at 4.13. He did regain his fastball velocity, which registered an average of 93.2 miles per hour, which was more in line with his 2005-12 seasons than his 2013 campaign when it dropped to 92.5 miles per hour.

Throughout his career Volquez has dealt with command issues. His career walk rate is 11.3 percent. While he’s managed to lower the rate of free passes issued, Volquez has also seen a reduction in his strikeout rate. Projection systems aren’t buying the comeback season. Steamer projects a 4.60 ERA in 29 starts, and ZiPS is substantially similar. Those are numbers befitting of a No. 5 starter, and at $20 million, a pricey one.

Still, Volquez will have the benefit of pitching in front of an excellent defense. The Royals are strong up the middle with Alcides Escobar, and their outfield tandem of Alex Gordon, Lorenzo Cain, Alex Rios and Jarrod Dyson cover more ground than any other group. If he’s to have success in 2015, Kansas City is the place to be.

So far this offseason the Royals have seen Billy Butler sign with the Oakland Athletics and free agents James Shields and Norichika Aoki are all but certain to sign elsewhere. In their place they have added Kendrys Morales, Volquez and Rios. The Royals are betting on a bounceback season from Morales, and perhaps from Rios as well. But, at least on paper these are significant downgrades. 2014 was a remarkable season for Kansas City, but they will have a tough road to get back to the postseason in 2015.