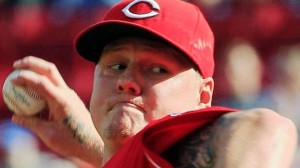 The Miami Marlins have acquired starting pitcher Mat Latos from the Cincinnati Reds reports Ken Rosenthal of Fox Sports. In exchange the Reds will receive pitcher Anthony DeSclafani and catcher Chad Wallach. It’s been a busy couple of days for the Marlins who acquired second baseman Dee Gordon from the Los Angeles Dodgers Wednesday night.

Latos, who turned 27 earlier this week, is coming off an injury-plagued year. He made just 16 starts as an elbow injury limited him significantly. Prior to that he had posted four straight solid seasons as a member of the San Diego Padres and Reds. The big right-hander authored a 3.27 ERA between 2010-13 with a 22.7 percent strikeout rate. Over that time he ranked in the top 20 among major league pitchers in WAR.

While Latos posted a 3.25 ERA in 2014, there are some red flags in his profile. His strikeout rate dipped all the way down to 17.6 percent, and after years of seeing his fastball sit in the low to mid 90s, his average velocity fell to 90.7 miles per hour. It’s possible that Latos came back without fully recovering from his elbow troubles. Perhaps it’s an issue that will continue to dog him, or maybe he just needs a full offseason to get back to full strength. Latos with a healthy elbow is a very good pitcher, albeit one that is just one year away from hitting free agency.

The 24 year-old DeSclafani pitched to an ugly 6.27 ERA in 33 big league innings in 2014. Still, his strikeout and walk rates of 17.8 percent and 3.4 percent, showed some promise. He’s a fastball-slider pitcher who will likely have his struggles with opposite-handed hitters. Cincinnati will surely give him a shot in the rotation, but it’s more likely he ends up in a relief role.

The Marlins have been aggressive this offseason, apparently with hopes of competing in 2015. They’re a long shot to compete, which made the trade for Gordon somewhat puzzling. Miami brass is hoping that Latos can return to his 2010-13 form, which could make this trade look pretty good for them.