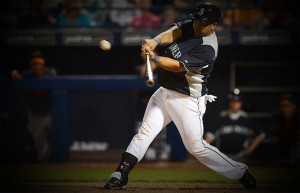 The Kansas City Royals have signed designated hitter Kendrys Morales to a two year deal worth $17 million, reports Jeff Passan of Yahoo Sports. The deal could be worth up to $18.5 million with performance incentives. Morales will slot into the DH role left vacant when Billy Butler signed with the Oakland Athletics.

Morales was one of the more interesting stories last offseason. He declined the qualifying offer extended to him by the Seattle Mariners and reportedly was seeking a four or five year deal in the range of $15 million. With teams unwilling to meet his financial demands and burdened by the draft pick compensation, he went unsigned until June when the Minnesota Twins snatched him up.

Morales performed miserably in his stint with Minnesota and when the Twins fell out of playoff contention, they traded him to the Mariners. He didn’t fare much better there, and posted a combined batting line of .218/.274/.338 with just eight home runs. Overall he was worth nearly -2 WAR despite playing only 98 games.

Prior to his disastrous 2014 season, the switch-hitting Morales had a reputation as a solid hitter. In 2013 with the Mariners he slugged 23 home runs and batted .277/.336/.449, and he posted nearly identical numbers in 2012 with the Los Angeles Angels. He is constrained to DH and perhaps occasional first-base duty and is a liability on the basepaths.

In 2015 Steamer projects a .259/.316/.421 slash line for the 31 year-old Morales. That comes out to a 106 wRC+, which would make him little more than a replacement level player as a designated hitter. The Royals are betting strongly that he can bounce back closer to his 2012-13 performance.

It’s odd that the Royals would decline the $12.5 million option on Butler’s contract and then turn around and sign Morales. Both are coming off of poor seasons, though Morales’ year was much worse. Neither can play the field or run the bases. They do have track records that offer reason to believe they will improve on their 2014 performances, though Butler is also three years younger and produced a .313/.373/.510 slash line as recently as 2012.

This isn’t a huge financial commitment, even for a smaller market team such as the Royals. But, it sure doesn’t seem like the best use of the resource they do have.