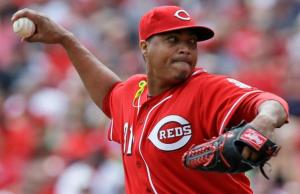 The Detroit Tigers have acquired pitcher Alfredo Simon from the Cincinnati Reds in exchange for shortstop Eugenio Suarez and pitching prospect Jonathan Crawford, reports Ken Rosenthal of Fox Sports. It’s the second trade the Tigers have made today. Earlier they sent Rick Porcello to the Boston Red Sox in exchange for outfielder Yoenis Cespedes.

Simon, a veteran right-hander, made a career-high 32 starts for the Reds last season. Prior to that he pitched in their bullpen. In 2010, he served as the closer for the Baltimore Orioles, notching 17 saves though he owned a bloated 4.93 ERA. The 33 year-old has a big fastball, but hasn’t generated a lot of strikeouts over the course of his career.

Simon won 15 games for the Reds in 2014, and pitched to a strong 3.44 ERA. However, his underlying numbers were far less impressive. He struck out just 15.5 percent of hitters while posting a walk rate of 6.9 percent. An opponents in-play batting average of .265 and a strand rate that approached 80 percent helped to keep his ERA down. For his career the big right-hander owns a career 3.86 ERA over 529.1 innings with just 1.2 WAR. He may factor into the Tigers 2015 rotation, but he’s best looked at as a No. 5 starter. At 33 years old and with just one year of team control remaining, Simon doesn’t offer a whole lot of upside if any.

Suarez made a strong first impression in his first few games as the Tigers shortstop. He cooled off though, and ended up hitting .242/.316/.336 in 85 games. The 23 year-old has authored some impressive stat lines in the minor leagues. Suarez has potential as a average or above-average hitting shortstop who can field the position adequately. Most likely he’ll compete for the Reds starting job right away and should beat out incumbent Zack Cozart.

Crawford was the 20th overall pick in the 2013 draft. He spent the 2014 season in Single-A where he managed a 2.85 ERA but had some command issues. The right-hander possesses a good fastball that works in the mid 90s and a slider with strikeout potential. If the Reds see him as a future starter, his development could take some time. However, he could move quickly in a relief role.

The Reds are clearly looking to rebuild. Earlier today they sent pitcher Mat Latos to the Miami Marlins for a couple of prospects, and with this deal they’ve traded away another member of their 2014 rotation. It’s possible that they could continue to wheel and deal. Johnny Cueto would be an attractive target for any number of teams.