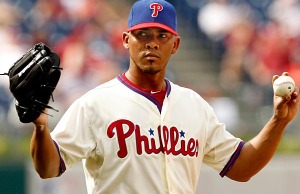 After their ill-fated attempt to reunite with Andrew Miller, the Boston Red Sox are discussing a deal with Philadelphia to acquire another power left-hander. According to Sean McAdam of CSNNE.com, Boston is interested in landing 29-year-old lefty Antonio Bastardo for infield prospect Sean Coyle, who is from the Philadelphia area.

At the trade deadline last July, the Red Sox traded Miller to Baltimore for highly regarded left-handed starting pitching prospect Eduardo Rodriguez. Boston pursued Miller this offseason before the veteran inked a four-year, $36 million contract with the New York Yankees. Currently, 30-year-old journeyman Tommy Layne is the only left-hander slated to open the 2015 campaign in the Red Sox bullpen. Layne posted a 0.95 ERA in 30 appearances and 19 innings for Boston in 2014, but he does not possess a power arm. Bastardo does.

A veteran of six Major League seasons, all with the Phillies, Bastardo allowed 43 hits in 64 innings over 67 games last season. He logged a 3.94 ERA and struck out 11.4 hitters per nine innings along with walking 4.8 per nine innings. Effective against hitters from both sides of the plate, Bastardo limited lefties to a .175 average and righties to a .195 mark. His road ERA was 3.58, markedly better than his 4.21 ERA at Citizen’s Bank Park.

The Red Sox are expected to add a left-handed reliever since Layne does not have a proven track record. Neither does 25-year-old Drake Britton, who did not allow a run in 6.2 innings and seven games last year at the Major League level but struggled at Triple-A Pawtucket.

A third round pick out of a Philadelphia area high school in 2010, Coyle has climbed the Red Sox prospect rankings. The 22-year-old infielder batted .295 with an .883 OPS, 16 home runs and 61 RBI at Double-A Portland and was impressive in the Arizona Fall League. Coyle’s primary position is second base, and the Red Sox, of course, have Dustin Pedroia signed long term.

Bastardo would serve as a primary set-up man to Koji Uehara along with Junichi Tazawa and Edward Mujica. Coyle could compete for a spot on the Phillies Opening Day roster if the club trades veteran Chase Utley. At the least, Coyle would give the Phillies a second baseman of the future when they part ways with Utley.

$6.28 Billion in Sales Expected for Rite Aid Co. This Quarter