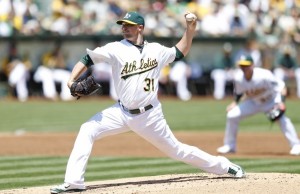 Jon Lester has finally made his decision. After deliberating for days, the 30-year-old left-hander has agreed to a six-year, $155 million deal with the Chicago Cubs, according to multiple media reports. Lester will earn a $25.83 annual average salary.

Over the last 24 hours, Lester eliminated the San Francisco Giants and Los Angeles Dodgers from his list of potential destinations, leaving the Cubs and Red Sox. Lester was an instrumental part of Boston’s World Series titles in 2007 and 2013. Reports indicate the the Red Sox offered him six years and $135 million.

After posting a 110-63 record over nine seasons in Boston, Lester was traded to Oakland at last July’s deadline with Jonny Gomes and cash for outfielder Yoenis Cespedes and a competitive balance pick. The left-hander logged a 0.43 ERA in three World Series starts during his tenure in Boston, and A’s general manager Billy Beane anticipated Lester guiding Oakland deep into the playoffs. Lester was on the mound when Kansas City rallied for a win in the wild card game.

Lester’s signing with the Cubs reunites him with Theo Epstein and Jed Hoyer, who were in the Red Sox front office during his time in Boston. He joins a rotation that currently includes the recently inked Jason Hammel and Jake Arrieta. Travis Wood, Kyle Hendricks, Tsuyoshi Wada, Jacob Turner and Felix Doubront will also compete for spots.

Still needing a No. 1 starter, the Red Sox will likely turn their attention to acquiring Phillies left-hander Cole Hamels via trade and/or signing free agent right-hander James Shields. The club is not expected to pursue Max Scherzer, who is represented by Scott Boras and is reportedly asking for a minimum of $200 million for his next contract.

Right-handers Joe Kelly and Clay Buchholz are expected to be part of Boston’s rotation next season. Red Sox general manager Ben Cherington told the media on Tuesday that the team has reached out to numerous starting pitchers who are free agents and trade candidates. Detroit’s Rick Porcello; Cincinnati’s Johnny Cueto, Mat Latos and Mike Leake; and San Diego’s Andrew Cashner and Tyson Ross are among the arms that could be acquired for the right package of prospects.

The Red Sox have a deep and talented farm system rich with young pitching and position players, and with Lester’s decision, Cherington will undoubtedly tap into that depth to build the 2015 rotation.