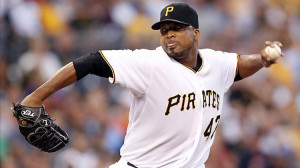 The Pittsburgh Pirates have re-signed Francisco Liriano to a three year deal worth $39 million, reports Jon Heyman of CBS Sports. Earlier in the offseason Liriano rejected the Pirates qualifying offer of $15.3 million. The Pirates added veteran pitcher A.J. Burnett back in November. He and Liriano were a formidable 1-2 punch at the top of the Pirates rotation in 2013.

The 31 year-old Liriano revitalized his career in Pittsburgh. After a couple of lackluster seasons with the Minnesota Twins and Chicago White Sox in which he posted ERAs north of 5.00, Liriano authored a solid 3.02 ERA in 161 innings of work with the Pirates in 2013. Last season he managed a 3.38 ERA while striking out 25.3 percent of hitters. By signing with Pittsburgh he’ll stick with pitching coach Ray Searage who has been credited with helping to resuscitate the careers of Liriano and Burnett.

Liriano’s biggest issue has been staying healthy. He’s never reached 200 innings in a season and only once has he made 30 starts. In two seasons with the Pirates he’s made 55 total starts. Furthermore, his control has always been an issue. His 11.7 percent walk rate was one of the highest in the major leagues, and his career rate sits at 10.1 percent. But, he possesses outstanding raw stuff as evidenced by a career strikeout rate of 23.9 percent.

With the Pirates Liriano has displayed excellent fastball velocity, and his trademark slider has been as devastating as ever. He’s also bought into the Pirates strategy of generating groundballs, as shown by his 54.4 percent groundball rate in 2014. Pittsburgh is the ideal environment for Liriano.

Three years and $39 million looks like a relative bargain especially considering the big money that pitchers such as Jon Lester, Max Scherzer and James Shields are sure to bring in. Liriano isn’t on the level of Lester and Scherzer, but when healthy he’s one of the most difficult pitchers to hit in baseball. At that price he doesn’t need to stay healthy for a full season, so long as he’s effective while on the mound.

That kind of commitment is a lot of money for a smaller market team such as the Pirates. However, Liriano looks like an ace at times, and he’s being paid like an average pitcher. It’s a deal that won’t sink the Pirates if it goes foul, and could carry a high reward if he pitches like he has over the last two seasons. It was surprising to see Liriano sign when the pitching market seems to be waiting for Lester to blink, but the Pirates appear to have picked a winner with Liriano.