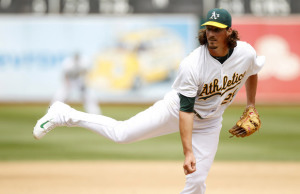 The Chicago White Sox and Oakland A’s are set to announce a trade that will send right-hander Jeff Samardzija to the Sox for infielder Marcus Semien and prospects and righer-handed starter Chris Bassitt, according to Susan Slusser of the San Francisco Chronicle.

Samardzija ends up spending half a season with Oakland joining the team along with Jason Hammel last summer in a trade that sent Addison Russell and Billy McKinney to the Chicago Cubs.

Hammel signed with the Cubs yesterday.

The White Sox now have Chris Sale, Samardzija and Jose Quintana on top of their rotation. Samardzija went a combined 7-13 with a 2.99 ERA and 202 strikeouts in 2014, splitting time between the Cubs and A’s.

Earlier the team added closer David Robertson on a four year deal as the new closer.