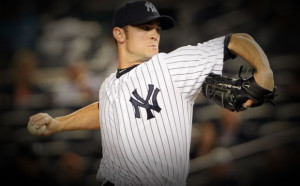 The Chicago White Sox have reached an agreement on a four-year deal with free agent closer David Robertson. The deal will reportedly pay Robertson $46 million. Robertson immediately becomes the teams closer who had been had not has a named closer since since Addison Reed was traded to the Arizona Diamondbacks last offseason.

The Yankees made a one-year qualifying offer of $15.3 million to Robertson for 2015, ensuring them draft-pick compensation if he signs with another team. However, that pick will be a second round pick because their first picks is in the top 10.

The Yankees receive an extra pick between the first and second rounds.

Robertson went 4-5 with 39 saves and a 3.08 ERA after taking over the closer role in New York last year from Mariano Rivera. The 29-year old has a 2.81 ERA over seven seasons. He performed admirably, notching 39 saves and registering a 3.08 ERA. His xFIP of 2.13 was a career-best mark, as was his strikeout rate of 37.1 percent. Opposing batters managed to hit just .191 against Robertson.