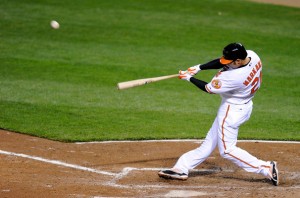 The Atlanta Braves have agreed to a four year deal with free agent oufielder Nick Markakis that is worth $44 million, reports Jeff Passan. It’s yet another move in what has already been a busy offseason for Atlanta. Earlier they dealt outfielder Jason Heyward to the St. Louis Cardinals, and they are actively shopping outfielder Justin Upton.

Since that time his power production has declined significantly. Markakis has never again reached 20 home runs, and he hasn’t been above 15 in the last five seasons. His WAR numbers have ranged right around +2, though they dipped all the way to replacement level in 2013.

Markakis has won Gold Glove awards in 2011 and 2014. However, both UZR and DRS have graded him out as below average in nearly every season since 2009, with the exception being this year, where he came in slightly above-average. He possesses a strong arm, but there are valid concerns about his range. He’ll have very big shoes to fill in right, as the departed Heyward was a phenomenal defender.

In addition, Markakis is tough to strike out. In an era where strikeouts are on the rise, that might be seen as a valuable skill. Unfortunately though Markakis does not make much damage when he puts the ball in play. Other than his injury-shortened 2012 season, his Isolated Slugging Percentage hasn’t been above .138 since 2010. In the last two seasons his power output is lower than players such as Michael Bourn and Zack Cozart.

It’s a curious move by the Braves to commit $44 million towards an under-powered corner outfielder on the wrong side of 30. When you consider that the franchise appears to be heading towards a rebuilding phase it’s even stranger. Looking to 2014 Markakis projects for a .268/.334/.381 batting line and just over +1 WAR. That’s not worth $11 million a year, and the next three years don’t figure to be any better.

The Braves have found a replacement for Jason Heyward. Unfortunately they had to commit significant money to a player that is average with little upside.