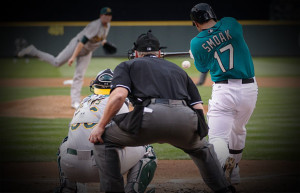 The Toronto Blue Jays signed first baseman Justin Smoak to a one-year, $1 million deal, and sent lefty J.A. Happ to the Seattle Mariners in exchange for outfielder Michael Saunders, The Blue Jays claimed the 27-year-old Smoak in October, but non-tendered him on Tuesday to avoid paying him approximately $3 million in arbitration.

Happ, 32, went 11-11, with a 4.22 ERA, in 28 starts for the Blue Jays this year and solidifies a rotation in the event the Mariners are forced to give up a younf arm such as Taijuan Walker or James Paxton to obtain an outfield bat they so covet, like Justin Upton. The Blue Jays are no longer pursuing outfielder Melky Cabrera, according to Sportsnet.

While that was expected following the team’s trade for Michael Saunders, General manager Alex Anthopoulos confirmed that this move takes them out of the race for Cabrera.