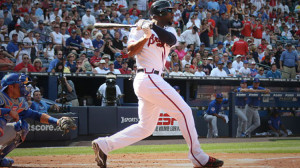 The St Louis Cardinals and Atlanta Braves have executed the first major trade of the offseason. Atlanta sent outfielder Jason Heyward and right-handed reliever Jordan Walden to the Cardinals in exchange for starting pitcher Shelby Miller and pitching prospect Tyrell Jenkins. With the move the Braves added depth to a rotation that projected to be one of the weakest in baseball, and the Cardinals found a corner outfielder.

The 25 year-old Heyward will hit free agency next offseason. Though he hasn’t quite lived up to the sky-high expectations that were set for him when he made his major league debut as a 20 year-old, he’s still a very good player. Heyward has never posted monster offensive numbers, but he possesses a .262/.351/.429 career slash line for a 117 wRC+. He’s also a very good defender that runs the bases well.

Heyward has dealt with injury issues in his five-year career, and with the exception of the 2012 season he’s never reached 150 games in a year. 2012 was his best offensive campaign as Heyward clubbed 27 home runs and managed a .269/.335/.479 slash line. This past year he hit just 11 home runs and produced a lowly .113 ISO. Still, thanks to a good walk rate and a reduced strikeout percentage, Heyward managed a .351 on-base percentage and a 110 wRC+.

Steamer projects a .271/.355/.449 line for Heyward and 4.8 fWAR. Those are very good numbers, and he should instantly become one of the Cardinals top players. If they can sign him to a contract extension, this trade could reap benefits for years.

Jordan Walden is another flamethrower in a bullpen that has plenty of heat. He has a career 28.6 percent strikeout rate and his average fastball velocity is just shy of 97 miles per hour. He’ll team up with Trevor Rosenthal and possibly Carlos Martinez to conquer the late innings. 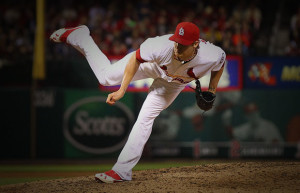 Shelby Miller is just 24 and is under team control for another four seasons. However, he’s likely not nearly as good as his career 3.33 ERA might suggest. Miller authored a 3.06 ERA in his rookie season of 2013, and struck out 23.4 percent of hitters. But, he faded down the stretch, and the Cardinals kept him on ace for the entire postseason.

He got off to a disastrous start in the 2014 season. Even with some better performances in the last two months of the season, Miller’s 4.54 FIP was one of the worst marks in baseball. His strikeout rate dipped to 16.6 percent and his walk rate inflated to 9.6 percent.

While his 3.74 ERA was significantly better, it was still worse than the major league average. Projections don’t think he’s much more than a replacement level pitcher. The Braves are betting that he still has some upside left and can regain his form from the first half of 2013.

Tyrell Jenkins is a lanky 22 year-old hurler who was picked 50th overall out of high school in 2010. He struggled to put away hitters in High-A this year and fanned just 13.3 percent. Jenkins has size and athleticism on his side, and the Braves are hoping he can put it together.

It seems that the Braves could have gotten a bigger return for Heyward, even if he is entering his walk year. He’s only a year older than Miller, and if the power aspect of his game comes together, he could put together a monster year. Even without big offensive numbers, he’s still a very good player. Cardinals General Manager John Mozeliak did well.