Miami Marlins Closing in on Huge Deal with Giancarlo Stanton 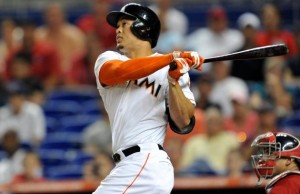 The Miami Marlins are closing in on a 13 year, $325 million dollar deal with slugger Giancarlo Stanton, reports Jon Heyman of CBS Sports. The deal would be the largest in baseball history. It would reportedly contain both a no-trade clause and an opt-out clause, giving Stanton the power to control where he would go in the event the Marlins considered moving him and the flexibility to hit free agency earlier.

There’s no doubt that Stanton is one of the best players in the major leagues. He’s also just 25 years old and will be under team control for two more years. Despite missing the final three weeks of the season after he was hit in the face with pitch, Stanton led the National League with 37 home runs. He produced an excellent .288/.395/.555 slash line and racked up 6.1 fWAR in 145 games.

Stanton made his big league debut at the age of 20 in 2010. In 100 games he smashed 22 home runs and compiled a solid .259/.318/.507 slash line with 2.3 fWAR. Since then he’s established himself as one of the most fearsome hitters in baseball. Even with the missed time, he’s hit 154 home runs since 2010. Only Jose Bautista and Miguel Cabrera have hit more home runs in that time span.

Stanton has suffered several injuries during the course of his young career. 2014 was just his second season of at least 600 plate appearances. He missed a good chunk of both the 2012 and 2013 seasons, and appeared in only 239 games total. A frightening beaning caused him to miss the final weeks of the 2014 season. Signing Stanton to a 13 year deal would put him under contract through the 2027 season, and buy out 11 years of free agency.

Stanton should continue to be one of baseball’s best hitters over the next few seasons, but if injuries have their way, his aging curve could be quite steep. At $25 million per year, he should still be undervalued for the first several seasons of his career. It’s odd that the Marlins, a franchise known for being extraordinarily stingy are bent on giving Stanton the richest contract in baseball history.

Stanton is a great player, and a $325 million extension isn’t ridiculous given that he just turned 25 last week. But, the Marlins might not be the right team to give him this deal. While there are reasons for optimism in Miami as the franchise has some exciting young players, Jeffrey Loria is notoriously unpopular and difficult to deal with. Getting Stanton under wraps for the long-term would give Marlins fans hope for the future.