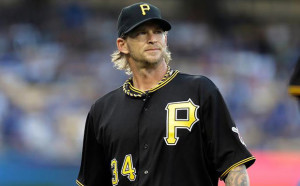 The Pittsburgh Pirates are reunited with starting pitcher A.J. Burnett. The 37 year-old hurler signed a one-year deal worth $8.5 million according to Jon Heyman of CBS Sports. Burnett previously played for the Pirates from 2012-13.

In his two seasons with the Pirates, Burnett posted some of the best numbers of his career. He managed a 3.41 ERA with strikeout and walk rates of 23.6 percent and 7.8 percent, respectively. In addition, he had one of the highest ground ball rates in the major leagues. All of these factors contributed to a stellar adjusted xFIP of 82, which ranked 11th in the major leagues over that time frame. Furthermore, he helped the Pirates end a playoff drought of more than 20 seasons.

The Pirates declined to extend a qualifying offer to Burnett last offseason, and the right-hander mulled retirement. He ended up testing the market and signed a one year deal with the Philadelphia Phillies that included a $12.75 million player option for the second year. Burnett’s numbers in Philadelphia weren’t nearly as impressive.

The veteran hurler’s strikeout rate dipped from 26.1 percent to 20.3 percent, and his walk rate rose to 10.3 percent. His 4.59 was his highest mark since the 2011 season with the New York Yankees. While his 3.95 xFIP was more encouraging, it was still more than a full run higher than the previous season. He pitched the entire season with a hernia that required surgery in the offseason. That likely factored into his poor performance. The Pirates are hoping a healthy Burnett can return to his 2012-13 form.

While Burnett’s decision to turn down his option cost him more than $4 million, he’s reunited with the Pirates and their pitching coach, Ray Searage. This isn’t the first time the Pirates have bought low on Burnett. After disastrous 2010 and 2011 seasons with the Yankees, the Pirates acquired him in what was basically a salary dump for the Yankees, sending away low-level prospects. He cost the Pirates just $13 million and produced two excellent seasons.

Burnett rejuvenated his career with Pittsburgh. He’ll turn 38 in January, but he’s getting another shot in the Pirates rotation after a difficult season with the Phillies. They’ve had success with reclamation projects in the past. Pitching coach Ray Searage has been credited with turning around Burnett in his first go-round with the Pirates, Francisco Liriano had two strong seasons in Pittsburgh, and Edinson Volquez turned in a surprisingly low ERA on a one-year deal.

It’s a good signing for Pittsburgh, who faces the potential departures of Liriano and Volquez, both of whom are free agents. Gerrit Cole sits atop their rotation, and Vance Worley and Jeff Locke could also factor in. Beyond that there are a lot of question marks, though the Pirates figure to be active in attempting to acquire veteran arms.