Jhonny Peralta is Having a Career Year for the Cardinals 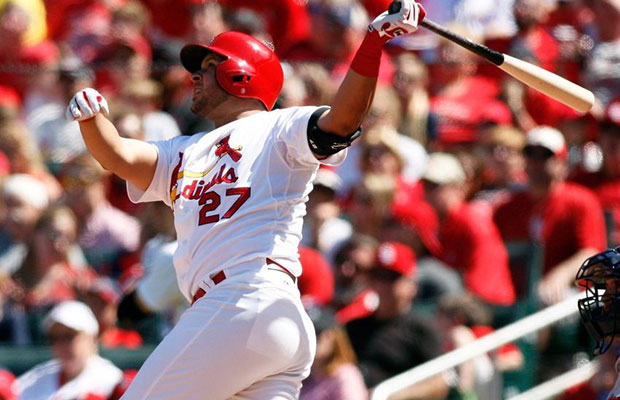 Thanks to a recent surge, the St. Louis Cardinals are in position for the first wild card spot. They sit in second place in the National League Central, 2.5 games behind the Milwaukee Brewers. Though the team has the fewest home runs in the NL, shortstop Jhonny Peralta has supplied power to the Cards lineup.

Peralta had an excellent year for the Detroit Tigers in 2013. He hit .303/.358/.457 for a 123 wRC+ with 3.6 fWAR. However, his involvement in the Biogenesis scandal earned him a 50 game suspension, and he appeared in just 107 games. When he returned for the playoffs, rookie Jose Iglesias played shortstop, and Peralta saw time in left field.

The Tigers declined to make Peralta a qualifying offer, and most analysts predicted he would received something in the range of two years and $15-20 million. Some teams considered him for an outfield spot, thinking the 32 year-old shortstop would not be able to handle the position. But, the Cardinals swooped in and signed Peralta to a four year deal worth $52 million, with the intention of having him replace the punchless Pete Kozma and Daniel Descalso.

Peralta has been a godsend for the Cardinals. Last season their shortstops combined to produce a .226/.282/.314 batting line and -0.4 fWAR. This year Peralta has produced a .266/.340/.453 line for a 124 wRC+ and 4.4 fWAR. With the exception of Troy Tulowitzki, who is undergoing season-ending hip surgery, there isn’t a shortstop that has been more valuable than Peralta.

This season Peralta has trimmed his strikeout rate to 17.3 percent while also drawing walks at a 9.2 percent clip. Busch Stadium isn’t a hitters’ paradise, but Peralta has hit very well at home. His .187 ISO is his best mark since the 2008 season, and he leads the Cards with 16 home runs. In August, Peralta is hitting .349/.397/.540, which has helped the Cardinals to a 10-7 record. With Yadier Molina out and Matt Holliday struggling to hit for power, his offensive contributions have been vital for the Cardinals.

Besides producing solid offensive numbers, Peralta is an underrated defender. With his stocky frame, he doesn’t look the part of a shortstop. Before he was traded to the Tigers, the Cleveland Indians had moved Peralta off shortstop to third base. He transitioned back to the middle of the field with the Tigers, and defensive metrics have consistently graded him as one of the premier fielders in baseball.

While defensive metrics don’t have the same type of reliability as offensive or pitching metrics, there’s a four year sample indicating that Peralta is an excellent fielder. His range is better than his physique might suggest, and he has very good hands.

The Cardinals decision to commit four years and $52 million to a player coming off a 50-game PED suspension was widely panned. To this point it’s worked very well, and their front office deserves credit for making the move.