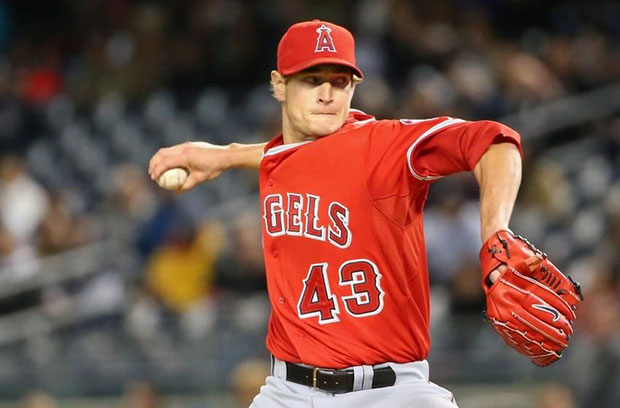 Entering play on Monday, the Los Angeles Angels are locked in a tie with the Oakland Athletics for the best record in the American League East and all of baseball. Mike Trout captures most of the headlines for the Angels, and the 23 year-old is the best player in baseball. A huge reason for the Angels success has been the dominant performance of 26 year-old right-hander Garrett Richards.

Richards has always possessed elite fastball velocity. Prior to this season, his fastball has averaged just under 95 miles per hour. However, over his first three big league seasons he pitched to a mediocre 4.42 ERA. Over that time frame, his strikeout rate was just 15.7 percent, hardly a number befitting a hurler who regularly touched the upper 90s.

There were signs of improvement in 2013, as Richards threw a career-high 145 innings between the bullpen and the starting rotation. His ERA dropped to 4.16, and his peripherals were better. His ground ball percentage rose to 57.9 percent. Still, his strikeout rate was only 16.3 percent.

Richards has taken off in 2014. His 4.4 fWAR places him in the top ten among major league pitchers, and ahead of bona fide aces such as David Price and Adam Wainwright. He boasts a 2.58 ERA, and opposing hitters have batted just .195 against the Angels ace.

The biggest change has been Richards’ strikeout rate. That number has jumped to 24.6 percent. He’s now throwing his slider on 30 percent of his pitches, and it has garnered a 17.6 percent swing and miss rate. When batters have swung at his slider outside the strike zone, they’ve made contact just a little more than one-third of the time.

In addition, Richards is pumping in his fastball harder than ever. This year the heater is averaging 96.3 miles per hour. Among qualified starting pitchers, only Yordano Ventura has thrown harder. His velocity is trending up as the season has gone along.

Despite the fact that Richards relies primarily on a fastball and slider with the occasional curveball mixed in, he hasn’t exhibited a platoon split. In fact, he’s actually had a little more success against left-handed batters. His K-BB% is 17.5 percent against left-handed hitters, compared to 16.5 percent against righties. Righties have hit .204 against Richards, and lefties are batting .188.

Thanks to a harder fastball and an improved slider, Garrett Richards has been one of baseball’s best pitchers. It’s been a great season for the Angels, who have had the season everyone expected them to have last year. Their position players, led by Trout, are leading the major leagues in fWAR. Their rotation doesn’t have the depth that the A’s or Detroit Tigers do, but with Richards at the helm, they will be a formidable force in the playoffs.