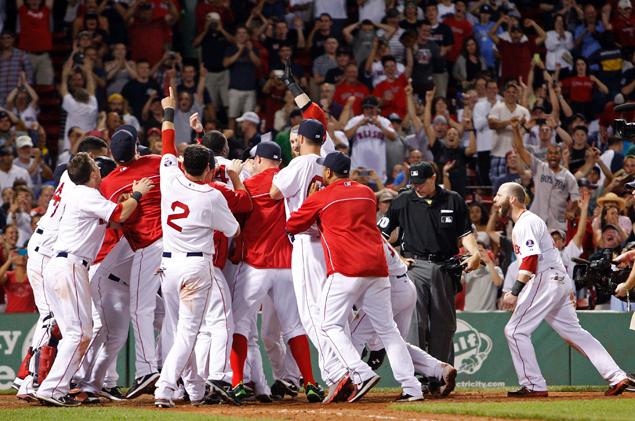 In most cases, when I write a baseball column, I do so as an objective professional journalist without reference to my team of choice, which is the Boston Red Sox. This column is an exception – an exuberantly striking exception.

The reason? After back-to-back seasons that have seen the storied Red Sox-Yankees rivalry lose its passion, the annual clash between two of baseball’s oldest clubs regained fire when Jacoby Ellsbury agreed to a seven-year, $153 million contract with New York earlier in the week.

Those of you who are not Red Sox fans might think that this would be reason for a tirade about Ellsbury, Scott Boras (his agent) and the Yankees as an organization. Yet it is not. News of Ellsbury’s signing, the inking of Brian McCann to a five-year, $85 million deal; and the loss of franchise player Robinson Cano brings me to a pointed conclusion.

Today, more than any previous period of the modern baseball era, it is better to be the Red Sox than the Yankees.

With a fresh and shiny World Series championship trophy, the Red Sox have a cast of talented core players, a healthy farm system that is stocked with high-ceiling prospects and enviable long-term payroll flexibility for a big market team.

The Yankees? They finished 85-77 in 2013 and did not make the playoffs. Their roster is saddled with an array of way-past-their-prime veterans with bulky contracts. Their farm system is mostly barren. And now they have lost their premiere offensive and defensive player in Cano, who reportedly agreed to a 10-year, $240 million contract with the Seattle Mariners.

It is fascinating how perceptions change from year to year in professional sports. Consider the Red Sox. During the 2004 postseason, they were beloved by most baseball fans who wanted to see the underdogs who had not won a World Series in 86 years take down the free-spending Yankees, which had ruled the majors for much of the previous decade. Feelings across baseball fandom gradually changed about the Red Sox as seasons passed.

By 2011 – when the Red Sox had collected high-priced luxuries like Carl Crawford, Adrian Gonzalez and John Lackey – you could credibly argue that Boston was even more despised than that organization known as the Evil Empire. Then, in a matter of months, the Red Sox became lovable again.

That fateful blockbuster trade with the Dodgers in 2012 freed Boston of albatross deals with Crawford, Gonzalez and Josh Beckett – three players who were strongly disliked by Red Sox fans because of their apathy and their seemingly countless excuses for underperforming.

After the 2012 campaign, general manager Ben Cherington was given the freedom to make moves without interference from the meddlesome ownership group, which partially created the dysfunction of 2012 by insisting of hiring Bobby Valentine. Cherington responded with the new direction by bringing aboard the well-respected John Farrell (in a trade with Toronto), who changed the culture for the better by adding coaches like Torey Lovullo, Brian Butterfield and Juan Nieves.

Instead of mimicking the Yankees and hurling extravagant money at prominent free agents, Cherington added complementary names like Jonny Gomes, Mike Napoli, Shane Victorino, David Ross, Koji Uehara, Mike Carp, Ryan Dempster and Stephen Drew. The strategy was to improve the clubhouse and the roster talent with useful veterans on short-term contracts, even if it meant “overpaying”  for that short term.

Cherington employed this strategy because he felt confident that the core group of David Ortiz, Dustin Pedroia, Will Middlebrooks, Ellsbury, Jon Lester, Clay Buchholz and John Lackey would rebound after 2012 seasons that were either marked by injuries, underperformance or both.

Picked by most so-called experts to finish last in the American League East, the Red Sox became the feel good baseball story of 2013 by capturing the division title and eventually the World Series with a likable cast. The core players rebounded, the rotation received stronger performances than expected from Lackey and Felix Doubront, the complementary pieces produced and prospects like Brandon Workman and Xander Bogaerts were valuable.

This offseason, Cherington is incorporating the same strategy. The club refused to offer more than five years to Ellsbury because they did not want to dish out a long-term deal to a 30-year-old outfielder whose game is based on speed and also because a viable long-term option is almost Major League ready in Jackie Bradley Jr.

Since they have invested the resources in cultivating a talented farm system, the Red Sox can replace shortstop Stephen Drew with Bogaerts and Ellsbury with Bradley, or they can have the left-handed Bradley bat against righties and acquire a right-handed hitting outfielder to face lefties. Shane Victorino, who is an exceptional defensive outfielder, can see time in center field as well as right field.

Because Cherington has wisely constructed the roster, and the farm system features an array of Major League ready contributors, the Red Sox do not have to spend big money on free agents who will hamstring the organization’s payroll flexibility for several seasons.

As for the Yankees, well, they are the Yankees. Apparently, they will always be the Yankees – tossing money on top of more money and hoping that eventually the formula will yield another World Series title.

Every offseason, it seems that the Yankees talk about launching a sustained commitment to creating a useful farm system and staying under the luxury tax threshold, but this offseason shows they are the same old Yankees. By signing Ellsbury and McCann, they have sacrificed their first two draft picks. They did gain a pick with Seattle signing Cano, yet the Yankees will undoubtedly pursue another free agent for a long-term deal, such as outfielder Shin-Soo Choo.

A glance at their roster and their farm system indicates that the club’s approach to constructing a roster is contrary to the Red Sox.

Just take a glance at the current names slated to break spring training with the Yankees. Ichiro Suzuki. Alfonso Soriano. Vernon Wells. Mark Teixeira. Derek Jeter. Alex Rodriguez (if he is not suspended by MLB). Impressive, if it was 2004. But when the calendar turns this New Year’s Eve, 2014 will arrive.

The Yankees not only continue to be disliked by the bulk of fans who follow Major League Baseball, but their roster construction strategy remains flawed. They are always atop the payroll list – or at least near the top – yet they have won just one World Series in the last decade. Haven’t they learned from teams like the Los Angeles Angels, Los Angeles Dodgers and the Red Sox of 2010 through 2012 that money does not equate to World Series rings?

Baseball as a whole has changed. With luxury tax implications and draft pick costs tied to signing free agents who have received qualifying offers, the blueprint for winning a World Series is the one authored by Cherington in 2013.

The Yankees are not following that blueprint.

CC Sabathia‘s subpar 2012 numbers (4.78 ERA, and 224 hits allowed in 211 innings) could be just a result of a forgettable season. Or perhaps the seven consecutive seasons of 200 or more innings is leading to a rapid decline. Sabathia is 33, and he has the wear and tear of 13 Major League seasons. He is owed $71 million through 2016, and he has a $25 million vesting option for 2017. He is regressing to a middle of the rotation arm who is compensated like an ace.

Mark Teixeira, who is signed through 2016 at $22.5 million annually, is 33, can’t seem to stay off the disabled list and has not remotely been as productive as the Yankees expected when he has managed to stay healthy.

Jeter is 39 and his mobility and range will be diminished if he returns to shortstop.

Even if Alex Rodriguez is suspended by MLB in 2014, sparing the Yankees of paying him $25 million, they will still be accountable for $61 million from 2015 through 2017 that will be paid to an aging veteran who has a bad hip.

Beyond Sabathia, the Yankees rotation is lackluster. They still need to make acquisitions to bolster that area, and the bullpen, which will rely upon David Robertson to somehow follow the now retired Mariano Rivera in the closer’s role.

Like every club, the Yankees do have a couple promising prospects. Catcher Gary Sanchez could be ready by 2015, and the team can transition McCann to first base or DH. Mason Williams is an intriguing outfielder who is also projected to be ready by 2015. Unlike the Red Sox, though, the Yankees lack talented depth in their minor league system, and a reason why is their preference to sacrifice draft picks by signing high-priced free agents who have received qualifying offers.

The Yankees evidently did not learn their lesson from signing Rodriguez and Teixeira to long-term deals when they inked Ellsbury to a seven-year contract. Curtis Granderson, the Yankees previous center fielder, spent ample time on the DL. Ellsbury has a history of injuries as well.

It is unfair to call Ellsbury “soft.” Injury prone, yes. Soft, no. He missed most of the 2010 season when he collided with third baseman Adrian Beltre while chasing a fly ball. In 2012, he was sidelined for all but 73 games when then Tampa Bay Rays shortstop dropped on Ellsbury’s shoulder when the latter slid into second base.

This year, he suffered a late-season stress fracture to his foot, returned for the postseason and played with that sore foot and a badly bruised hand. Yet he is not worth the annual salary and the length of the contract. Ellsbury’s game is predicated on disruptive speed. He will maintain that during the first few years of the contract, but no player can outrun age.

Like Rodriguez, Teixeira and Sabathia are proving, Ellsbury and McCann are players who will likely be productive in the early stages of their contracts, but their numbers will gradually decline as they get older, yet the Yankees will still be obligated to their costly salaries.

Since their farm system is weak, they struggle to fill multiple holes from within, such as the current second base vacancy and their need for a shortstop. The wake of losing Cano will move the Yankees to make more staggering signings. That is how the Yankees operate.

The Yankees are a team mired with creaky veterans who are owed excessive money. They are trying to fix a problem created by an unwise use of money by tossing out more money and hoping fortunes will improve. Who is running this club? The White House? Congress?

As a Red Sox fan, I applaud the Yankees’ strategy. Let them continue to stockpile bad contracts that will hamstring them when those players do not remotely produce at the level at which they are being paid. Go ahead, Mr. Cashman. Sacrifice draft picks by signing high-priced free agents who have turned down their qualifying offers. That increases the chances that your farm system will remain desert dry.

Over the last decade, the Red Sox have three World Series rings. The Yankees have one. Yet that is not solely why it is better to be the Red Sox than the Yankees. The defining reason for that is how the Red Sox constructed their 2013 World Series championship club and what the Yankees are yet again doing this offseason.

The recipe that the Steinbrenner boys are using is tainted with a pungent smell. Red Sox fans widely say, “They can dine in their kitchen, and we will gladly gather in ours.”