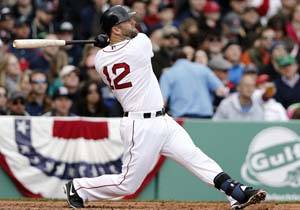 Mike Napoli talks are reaching the critical stage according to Jon Paul Morosi of CBS Sports. The Miami Marlins, Texas Rangers, Seattle Mariners, and Boston Red Sox are all in contention to sign the first baseman.

Napoli played the 2013 season on a one-year deal worth $13 million after his three-year contract was voided due to a degenerative hip condition. Despite the condition, he set a career-high in plate appearances with 578, and did not have any issues concerning the hip.

In his first year as a full-time first baseman, Napoli put up solid numbers. He produced a .259/.360/.482 line with a 129 wRC+. Also, he played excellent defense at first base, and compiled 3.9 fWAR. Napoli was a big factor in helping the Sox reach the World Series, as he clubbed two home runs and slugged .700 in the ALCS against the Detroit Tigers.

Ken Rosenthal reports that Napoli would like to return to the Red Sox, but he has a better offer that the Sox would have to match. As Napoli was one of 13 players to receive a qualifying offer, any team that signs him other than the Red Sox would have to forfeit a draft pick.

Napoli has excellent power, as shown by a .502 career slugging percentage and .243 ISO. His propensity to strike out is a concern, as he owns a career strikeout rate of 26.6 percent. In 2013, this number swelled to 32.4 percent. A .367 in-play batting average helped make up for that rate, but it’s unlikely that the slow-footed slugger can repeat that mark.

Still, Napoli has shown that he is capable of putting up huge numbers, particularly in a hitter’s park. In his 2011 season with the Rangers, he posted a .320/.414/.630 line with 30 home runs and a 179 wRC+ and 5.4 fWAR in just 432 plate appearances. If Prince Fielder resigns to the fact that he is best suited at DH, Napoli would be a good fit for the Rangers, who are looking for an upgrade on Mitch Moreland.

With Curtis Granderson receiving four years and $60 million from the New York Mets today, Napoli has a good claim for a similar contract. The monster year that he produce in 2011 may be out of the question, but a solid +3-4 win season is certainly feasible.