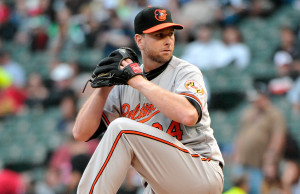 The Houston Astros signed Scott Feldman to a three-year, $30 million deal. Ken Rosenthal of Fox Sports was the first to report the deal. Because Feldman was traded from the Chicago Cubs to the Baltimore Orioles during the middle of the 2013 season, he was not eligible to receive a qualifying offer so the Astros will not lose a draft pick.

Feldman, 30, had a solid 2013 season. The big righthander bounced back from injuries that had hampered him the previous two years with the Texas Rangers to post a 3.86 ERA in 181.2 innings with a 17.4 percent strikeout rate and a 7.4 percent walk rate. He had a nice change of fortune from his 2012 season where a .318 in-play batting average contributed to a 5.09 ERA despite career best strikeout and walk rates.

Feldman is a solid but unspectacular signing. He won’t miss too many bats, as shown by his career 6.6 percent swinging strike rate. But, he doesn’t walk many and gets plenty of groundballs (47.1 percent career rate). Also, thanks to a cutter and a curveball, he’s equally effective against righties and lefties, which makes him well-suited for the starting rotation.

Compared to the signings of Jason Vargas and Phil Hughes, this looks like a solid pickup for the Astros. Feldman gets more groundballs than either, and strikes out more hitters than Vargas. He doesn’t have the upside of Hughes, but he’s experienced more success.

With the array of promising prospects the Astros have waiting in the wings, and the piles of money they have lying around, they could be competitive while Feldman is under contract. If they’re not, they could spin him off to a contender midseason as the Cubs did.

In either case, Feldman is a good asset at a reasonable price. This is the type of veteran acquisition that makes sense for a rebuilding team like the Astros.