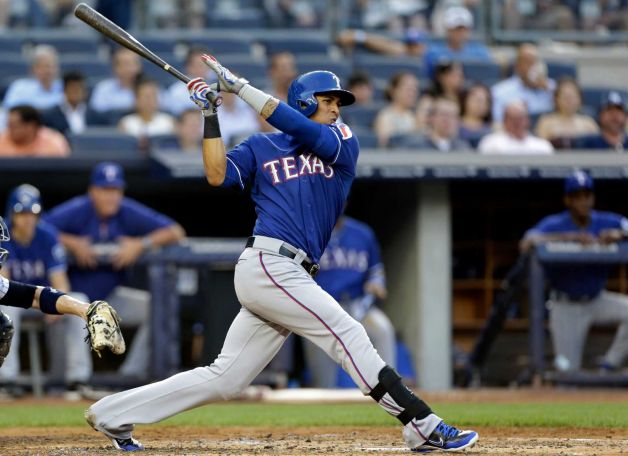 Leonys Martin, Starling Marte, and Rickie Weeks slugged two home runs each for their respective teams on Tuesday. While Marte and Weeks were able to relish in their team’s victories, Martin was not so lucky.

Martin’s performance would be upstaged by Ichiro Suzuki‘s walk-off shot in the bottom of the ninth, giving the Yankees the 4-3 victory over the Rangers.

Below are the recaps and highlights of Tuesday’s major league games.

Pittsburgh 9, Seattle 4
Pittsburgh lit up Mariners starter Joe Saunders in the second inning, as Russell Martin, Brandon Inge, and Starling Marte each hit a home run in the five-run effort, propelling the Pirates to a 9-4 rout of the Mariners.

Cincinnati 3, Oakland 7
Oakland third baseman Josh Donaldson led the charge with a two-run shot in the third, leading the Athletics in their seven-run effort against the Reds, as all seven runs would be charged to Cincinnati starter Bronson Arroyo who struggled in 4 1/3 innings of work on Tuesday.

St. Louis 13, Houston 5
Carlos Beltran, David Freese, and Allen Craig each launched two-run homers to lead the Cardinals in their 13-run bruising of the Astros on Tuesday, as Houston starter Lucas Harrell was charged with seven runs after coming into the game with a 1.73 ERA in four starts in June.

Atlanta 4, Kansas City 3
Jason Heyward slugged a go-ahead solo shot to right in the seventh to break a 3-3 tie and lead the Braves past the Royals for the eventual 4-3 victory.

New York 4, Chicago 5
Chris Sale struck out 13 batters on Sunday, but received a no-decision despite his valiant efforts, as the Mets would tie the game at 4-4 in the ninth. However, the White Sox would rally in the bottom of the frame, winning on a walk-off RBI single by Alexei Ramirez.

Toronto 1, Tampa Bay 5
After winning 11 games in a row, the Blue Jays have now dropped their last two against the Rays, as Tampa Bay starter Matt Moore held Toronto to just one run over six innings while striking out 11 en route to a 5-1 victory.

Colorado 4, Boston 11
Dustin Pedroia turned in a 3-for-5 four RBI performance for Boston, as the Red Sox pounded the Rockies for 11 runs, lighting up Colorado’s Juan Nicasio for seven runs on 12 hits over 2 1/3 innings en route to an 11-4 victory.

Los Angeles 14, Detroit 8
Angels newcomer J.B. Shuck turned in a 3-for-4 performance, driving in four runs in the Angels’ 14-run effort. An eight-run fifth saw the Angels bring up 13 batters, as Tigers starter Rick Porcello was rocked for five runs in the inning alone (seven in the game).

Texas 3, New York 4
Despite Leonys Martin’s two home run performance for the Rangers on Tuesday, the Yankees came away with the 4-3 victory on a walk-off solo shot by Ichiro Suzuki in the bottom of the ninth.

Cleveland 3, Baltimore 6
Chris Tillman pitched his way to his ninth win of the season, as Chris Davis and Alexi Casilla both slugged homers in the seventh, driving in five to give the Orioles a 6-3 lead and eventual victory over the Indians.

Philadelphia 6, San Diego 2
Domonic Brown slugged his 20th homer of the season (a three-run shot in the third), while Kyle Kendrick pitched eight innings of two run ball en route to his seventh win of the season, leading the Phillies in their 6-2 victory against the Padres at Petco Park.

San Francisco 5, Los Angeles 6
Hanley Ramirez highlighted a four-run sixth with a two-run blast to left, but it would be Matt Kemp‘s spectacular web gem in center field to end the game in the top of the ninth that would garner the attention on Tuesday, as Kemp made his first appearance since being placed on the DL at the end of May.

Chicago 3, Milwaukee 9
Rickie Weeks slugged two homers on Tuesday, a two-run blast in the sixth and a solo shot in the eighth to help lead the Brewers in a 9-3 rout of the Cubs at home on Tuesday.

Minnesota 2, Miami 4
Marcell Ozuna drove in two and Derek Dietrich launched a homer to give the Marlins their fourth victory in their last five games, as the Marlins downed the Twins by a score of 4-2 on Tuesday.

Arizona 5, Washington 7
Washington starter Gio Gonzalez can breath a little easier as he garnered his first victory since May, working 6 1/3 innings of two run ball, as the Nationals would beat the Diamondbacks 7-5 behind a three-run bomb by Adam LaRoche that capped a five-run fifth inning on Tuesday.