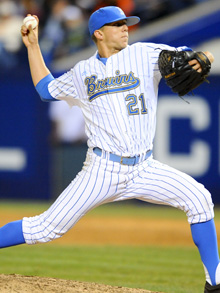 Coming into the first game of the CWS finals, the UCLA Bruins knew that they would need to play their best baseball in order to beat the Mississippi State Bulldogs for their first NCAA title. They did just that in game one and once again in game two, routing the Bulldogs by a score of 8-0 to capture the 2013 CWS title in Omaha.

After serving as the bridesmaid to South Carolina in the 2010 championship series and being ousted in the second round of the CWS last year, the Bruins can breath a sigh of relief and relish in the moment. The Bruins swept through regional, super regional, and CWS play to finish the postseason with a perfect 10-0 record, an impressive feat for a team that was considered one of the weaker seeds coming into Omaha.

As was the case in game one, the Bruins struck first and early, leading off the bottom of the first by getting the first runner aboard, as Brian Carroll was hit by an inside pitch by Luis Pollorena. Eric Filia would later come to the plate, slugging a sacrifice fly to right that scored Carroll for the first run of the game, giving the Bruins an early 1-0 lead.

The Bruins would strike again in the third, scoring two more runs. With Carroll on third and Kevin Kramer on first, Filia would hit another sacrifice, this time back to the mound, scoring Carroll in the process. Pat Valaika would follow with an RBI single, scoring Kramer and giving UCLA a 3-0 lead.

UCLA would pounce on Mississippi State once again in the fourth, as Cody Regis would rip an RBI single to center to score Kevin Williams, followed by a sacrifice fly by Kramer that would score Williams and the fifth run of the game for the Bruins.

The Bruins would score again in the sixth and eighth innings, courtesy of the hot-hitting Eric Filia. Filia would contribute with an RBI single in the sixth and would later extend the Bruins’ lead to 8-0 in the eighth with a two-run single, scoring Christoph Bono and Carroll.

While the Bruins’ offense contributed to the winning effort, so too did the pitching staff. Starter Nick Vander Tuig pitched another masterful performance, going eight scoreless innings, surrendering just five hits and striking out six batters while walking one. Closer David Berg would come into the ninth and shut down the Bulldogs for a 1-2-3 inning and the championship.

The UCLA Bruins did what they had to do and that was play championship baseball. They did that and then some on Tuesday, shutting down the Bulldogs for their first NCAA title in school history.

Congratulations go not only to the champion UCLA Bruins, but also to each of the teams that competed and played their hearts out in Omaha. Each and every player should be proud and honored on a successful, yet exciting season. Well done boys, well done.