Yankees GM Cashman: “Alex Should Just Shut the …….. Up” 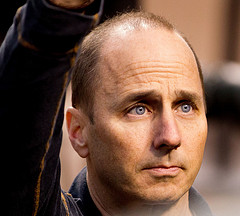 Not everyone is happy that New York Yankees third baseman Alex Rodriguez  is on Twitter.

Yankees General Manager  Brian Cashman angry over A-Rod’s decision  his rehab process step-by-step had  a not so measured response.

“You know what, when the Yankees want to announce something, [we will],” Cashman told ESPN New York. “Alex should just shut the f— up. That’s it. I’m going to call Alex now.”

A-Rod has been twee the progress of his rehab and on Tuesday tweeted that he had been cleared to play rehab games,  a tweet that was quickly squashed by Cashman.

“He has not been cleared by our doctors to play in rehab games yet,” he said. “He’s getting closer. There’s no doubt about it. But we don’t have a date for him to start playing games yet. It could be July 1. It could also be July 5, or maybe June 25.”

Cashman is not usually one to mince words and he pulled no punches to express his anger over A-Rod’s latest antics. As the events start piling up, it becomes increasingly more difficult to envision A-Rod stepping foot in the Bronx this season. On one hand, a healthy Rodriguez could no doubt help a weak right-handed lineup and an anemic offense.

On the other hand, Rodriguez is in the midst of battling back from another frustrating injury where the diagnosis was unclear to begin with and since stepping off of the field, Rodriguez has found himself in the middle of steroid controversy along with alleged fake charities, scandals of flirting with women as his team embarrassed itself in the ALCS and now this; Twittergate.

For Cashman, it has to be frustrating his team still owes A-Rod over $100 million dollars on a contract he never signed off on in the first place. There was a time when A-Rod’s production, like Manny Ramirez before him, justified tolerating some of the off field antics, no matter how innocent they may seem. However, half way through one of the worst contracts of all time, Rodriguez is barely on the field let alone producing and Cashman is no doubt becoming increasingly frustrated.

If Rodriguez can come back healthy and produce it could go a long way towards restoring fan’s outlook, Cashman’s patience and A-Rod’s welcome in the Bronx. However, tweeting his own timeline and undoubtedly sending the New York media into a frenzy won’t solve anything and any setback will now raise suspicion, not to mention can complicate the trade deadline depending on which timeline Rodriguez does actually return on. This season may have too much baggage to try to sell A-Rod back to his home team.

With the Yankees facing corner infield question marks and in need of offensive help regardless of A-Rod’s health, it’s understandable Cashman would like to be the one doing the talking and his player should be the one solely concentrating on returning to the field healthy. Any other player and it can be an honest mistake, this particular player and it surely seems like a bad habit ownership would like to see broken.