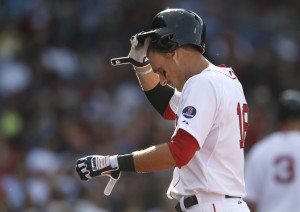 The Boston Red Sox have decided that the best remedy to get third baseman Will Middlebrooks on track is some time in the minor leagues and the team optioned the 24-year-old to AAA Pawtucket today and purchased the contract of infielder Brandon Snyder.

Jose Iglesias  who took over for Middlebrooks while he was on the disabled list with a lower back strain is getting the lion’s share of the playing time at third base. The surprising 23-year-old Iglesias, is batting .426 in 33 games this season, and has won the favor of manager John Farrell.

Middlebrooks said, “Am I disappointed in myself? Absolutely, because that’s what I can control. I can control how hard I work and what I do to perform. That’s something I have to change up in myself.”

Snyder was hitting .267 with 10 homers and 37 RBIs with Pawtucket this season.