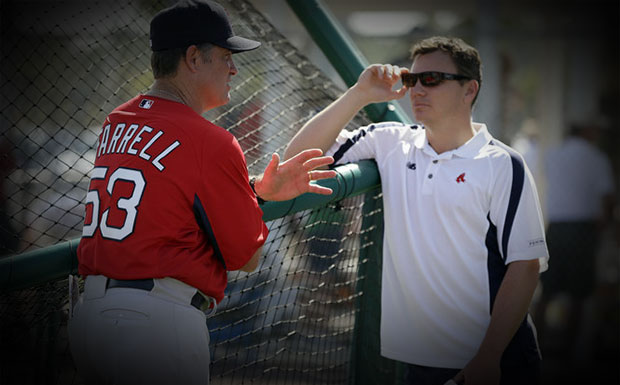 Coming into the 2013 season, the Boston Red Sox were not hailed as the preeminent contenders in the American League that they have performed like up this point, with many analysts and experts predicting that Boston would be stuck within a rebuilding season in the wake of a heartbreak 2011 collapse and downright forgettable 2012 that saw the Sox face a losing season for the first time since 1997 (and their worst season record at that since that fateful 1965 team that brought home a 62-100 record).

The Red Sox have either been at or around the top of the AL East division standings for much of this season, wherein they currently sit atop the division with an AL-best 45 wins (45-33 record overall); however, despite the recent success of the Sox, they hold only a 2.5 game lead over the second-place New York Yankees and a 5.5 game lead over the fifth-place Toronto Blue Jays.

To say that the AL East is both competitive and too close for comfort for Boston is surely an understatement.

With the July 31 trade deadline approaching within the next month, Boston should be in the midst of laying out its respective blueprints for the continuation of a successful 2013 campaign. In order to ensure that success, GM Ben Cherington must make the right moves to allow a potential postseason run to come to fruition.

Up to this point, it appears that Cherington may favor a strategy favoring frugality, but at the same time serving as a necessary means to sustain both a winning season and a talented farm crop. Rather than make blockbuster moves, Boston may find it in their best interest to make the minor moves that will fix the more temporary and manageable wounds.

With that being said, we can now look into the possible moves that may take place in the coming weeks that may serve as viable and necessary for the continued success of an overachieving Boston club.

For the most part, Boston’s deadline will center around the one aspect that they have and always will focus on come the trade deadline, that of starting pitching.

The Red Sox have always been on the lookout for starting pitching come time the trade deadline rolls around each season and this season is no exception. Aside from Clay Buchholz, who has solidified himself as the staff ace with a dominant start to the season, Boston has not enjoyed a consistent and stable starting rotation this season.

Jon Lester started off strong much like his fellow top of the rotation stalwart, but has been atrocious over his last seven starts, witnessing his ERA jump from a healthy 2.72 to a paltry 4.57. In that span, Lester has posted a 1-4 record and has given up no fewer than three runs in a game, while surrendering five runs or more in four of those seven outings.

While John Lackey and Ryan Dempster have provided solid starts this season, they have also displayed inconsistencies that may be hazardous in the stretch ahead. Despite giving Boston a decent amount of innings and a good middle of the rotation arm, Dempster has struggled to keep the job done on multiple occasions this season, as he has had lasting issues with his command and control.

Dempster will awe you with a great pitch, only to follow it with one that will leave you shaking your head.

With Buchholz battling injuries as of late and an inconsistent rotation, Alfredo Aceves has stepped up recently to give the Red Sox some strong outings. In his past three outings, Aceves has posted a 3-0 record and 1.59 ERA. While Aceves may not be able to sustain this recent display of strength throughout the stretch ahead, other teams may be interested in utilizing him on their rotation for their own respective summer run.

While Aceves may offer either a contending team or team looking to become contenders, the Sox may also look to shop around another valuable trade chip, that of their starting shortstop Stephen Drew.

Drew has provided solid defense at short, but primarily spotty offense at the dish, boasting a .221 batting average and an OBP/SLG/OPS line of .308/.373/.681 in 62 games this season.

Although his bat has not been impressive this season, Drew brings a veteran presence and crafty glove to the team, which may interest a team who is looking to add an everyday player at short and would be patient in waiting for Drew’s bat to come around (as he has proven to be a solid hitter who can hit to all fields in the past).

With that being said, Aceves and Drew may be key chips in garnering the talents of a starting pitcher and/or relief pitcher(s) for the stretch ahead, which leads us into the potential options at the mound for the Sox.

Phillies GM Ruben Amaro is adamant that he will not be trading away any key fixtures on the Philadelphia roster (which most likely includes that of Papelbon); however, Papelbon’s recent struggles on the mound and his willingness to publicly criticize his teammates may make a potential Boston-Philadelphia agreement plausible.

As for Cishek, many of the concerns surrounding the Miami reliever include whether he is ready for the big market style of play that is present within the AL East, as bringing him in as a potential closer or late-inning reliever may be much to ask of him, especially at this point in the season.

In terms of key rotation additions, landing either the Chicago Cubs’ Matt Garza or the Phillies’ perennial trade chip Cliff Lee may be the type of deal that may push Boston over the top into a serious title contender for the stretch ahead.

Garza has been on the Cubs’ shopping list for much of the past two seasons and with his return from the DL last month, his trade stock has risen with solid (and to be fair, some inconsistent) performances as of late.

Garza has the type of mid-90s heat and “bulldog” mentality to offer a rotation a solid frontend starter, and with his previous experience and success pitching in the big market of the AL east, Garza may be just the right fit for a Boston rotation that needs a burst of energy and excitement.

Lee may also be that burst of energy the Sox so desperately need, but that burst may be at a high price. In order to land a player like Lee (and this may well be the case in trying to nab Garza from the Cubs), the Sox are going to have to dish out some trade chips that extend well beyond the likes of Aceves and Drew.

Let’s not forget how Boston supposedly attempted to trade Jacoby Ellsbury straight up for Lee in the offseason, only to be rejected by Philadelphia.

While Lee may require the Sox to reach in their farm system to reach a deal for Lee, such a move may work for Boston, as they have a burgeoning amount of talent at the lower levels that could sustain such a deal, plus Boston would be more than capable of picking up the tab on whatever is remaining on Lee’s contract (Boston’s lineup looks to become filled with younger talent in the coming years, which could free up some money in sustaining a potential contract for Lee and other potential ventures in the offseason).

While Cherington may be looking to take the conservative/frugal rout come the trade deadline, perhaps the Red Sox may wish to spice it up with the acquisition of a big, impact arm in either Garza or Lee. While it may cost Boston some talent and cash, the dividends from such acquisitions may be well worth the risk.

If Buchholz can come back and remain healthy, Lester redirects his recent woes, Lackey and Dempster find consistency, and either Garza or Lee are thrown into that mix, the Red Sox will be legitimate title contenders come October, as Boston will become a formidable ball club along with their strong, burgeoning offense that continues to produce with each passing game.