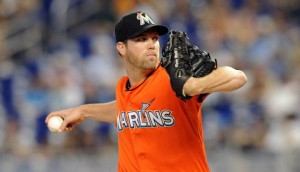 While most teams wonder what happens with hot-pitching Marlins’ pitcher, Ricky Nolasco, the Marlins are just as likely to deal some relievers at the trade deadline as they often do around this time.

The popular rumor was they would trade closer, Steve Cishek, since Miami does not have any interest in competing this season and can take advantage of numerous teams with reliever needs.

However, recent struggles from Cishek, particularly against lefties, has decreased his value and bloated his ERA to 3.45 in a pitcher’s park. Though Cishek has recorded 12 meaningless saves in 31.1 innings, it’s likely the Fish hold onto a 27 year old still in his pre-arbitration years,

With a chance to keep stockpiling prospects ala the Houston Astros the last couple of years, Miami is still likely to deal the easiest replaced commodities, and may start with Ryan Webb and Mike Dunn. Webb, also 27 -years-old, has a 3.41 ERA in 34.1 innings.

It’s unlikely they deal within the same division regardless of how far out Miami is, but the Braves could be in need of left-handed relief pitching and have had Dunn pitch in Atlanta before.

The Yankees have seen recent struggles from Boone Logan, who is in a walk year and has allowed too many inherited runners to score, but it’s unlikely New York gives up anything of value for Dunn, who was dealt by New York in the deal to bring back Javier Vazquez after New York drafted him in the 33rd round.

Ontrak and Its Rivals Financial Comparison