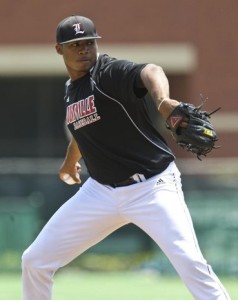 The Louisville Cardinals in the Oregon State Beavers look to avoid elimination today  in a must win game for both in the 2013 College World Series.  Oregon State lost its first-round game against Mississippi State 5-4 when the Bulldogs scored two runs in the go-ahead eighth-inning. Louisville was shut out 2-0  by Indiana in their first round game.

Offensively Louisville was only able to muster four hits in its loss to the Bulldogs and as a team is hitting just .241  in six NCAA tournament games in 2013.  The Cardinals are looking for big games offensively from Ty Young, Coco Johnson, and Jeff Gardner.

“Seems like one of those three guys can, as we say, win a game because if you notice there’s not a lot of runs being scored the last few weeks,” coach DanMcDonnell said. “

In contrast, Michael Conforto had four hits himself for Oregon State in their loss to Mississippi State. Oregon State is looking to rebound and may have some history on their side. Oregon State is 13-3 in one-run games after losing Saturday. The Beavers are 18-3 in games decided by two runs or less  and is 3-0 in Monday games this season.