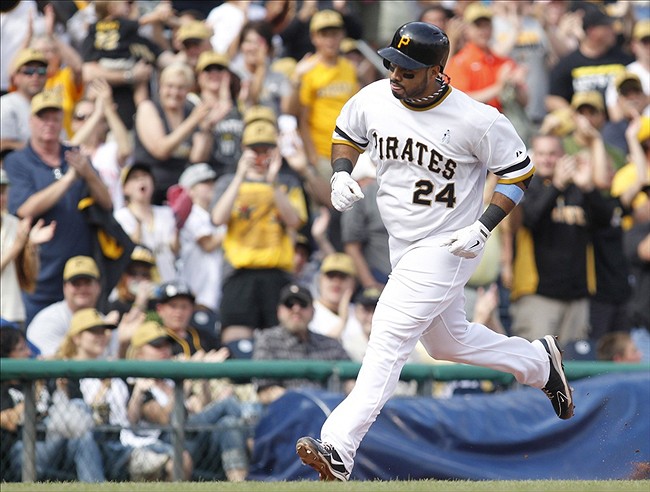 In the 2008 draft, the Pittsburgh Pirates selected a player they envisioned would lock down third base for years to come and more importantly the cleanup spot in the batting order for years to come. It has been a work in progress, as Pedro Alvarez has yet to do the latter, but in reality, Alvarez is right on schedule when compared to other power hitters and could become the new Adam Dunn.

The Pirates selected Alvarez third overall in 2008, passing on other highly touted position players such as Eric Hosmer and Buster Posey. Everyone knows the success Posey has had since coming into the league, but the Pirates wanted raw power in that draft and decided to go in a different direction.

Eric Hosmer– Selected third overall, Hosmer has yet to resemble the power hitter the Royals have envisioned back in 2008.

Justin Smoak– Smoak, the all time home run king in South Carolina, has not shown that power in the majors.

Ike Davis-The 18th overall pick in 2008, Davis has enjoyed more power success in the majors than the last two, but in 2013 has fallen on hard times, as he has been demoted to AAA after batting .161 through his first 55 games.

After comparing the other power hitters drafted in 2008, Alvarez’s power numbers match up with the best of them. All of the compared players have high strikeout numbers and a low batting average.

With the struggling Ike Davis now in AAA, it sure seems as if Alvarez is a lock to be the most productive power hitter selected from the 2008 draft.

There has been a lot of speculation about the development of Pedro Alvarez. Alvarez suffers through extremely cold streaks, but then breaks out into hot streaks. The strikeouts have been annoying to deal with as well for fans, but fans need to realize that power hitters strike out.

It took Ryan Howard until he was 26 to figure it all out, but when he did, Howard took the league on by storm.  Howard has over 180 strikeouts four times in his career-his four best seasons, when he hit 58, 47, 48, and 45 home runs. When the home runs come in bunches, the strikeouts seem to as well.

Oddly enough, Alvarez is 26 and seems to be putting together a banner year for himself. Pedro will not quite hit 58 bombs this season, but at this rate he seems more than capable of hitting the 40 mark.

Jim Thome did not hit reach the 30 home run plateau until he was 25 years old. When he turned 26, things took off for the future hall of famer. Thome lead the league in strikeouts three of the seasons he was crushing 33, 49 and 47 home runs. The difference with Thome was, he also lead the league in walks some of those seasons as well.

Alvarez does not walk enough and that is something that needs to be worked on. While comparing Pedro Alvarez to Jim Thome as a complete player is a reach at this point, for argument’s sake, the power numbers and strikeout numbers are comparable at this point in Pedro’s career.

Alvarez is on the verge of being Adam Dunn at this point in his career. Which is good and bad. It is good because Adam Dunn hits 40 home runs and drives in 100 runs every season. But Adam Dunn did not and does not have as high of a ceiling as Pedro does. Dunn has never hit better than .266 in his career and has led the league in strikeouts four times, topping out at 222 strikeouts in 2012.

Fans should wish Pedro Alvarez becomes the new Adam Dunn. Dunn has hit 424 home runs in his career and has been deadly consistent, not only with his home run numbers, but others as well. Dunn has a .367 career OBP and averages 109 BB per season. Those are numbers that Alvarez wishes he could touch at this point (.306 OBP, 59 BB per season).

If I would tell you that Pedro Alvarez would average 39 home runs, 96 rbi and own a .367 OBP and average 109 walks per season over a 13 year career, I think Pirates fans everywhere would accept that.

Pirates fans need to learn to take the good with the bad with Alvarez, as the strikeouts most likely are not going to diminish, if anything they will grow, but so will the power numbers.