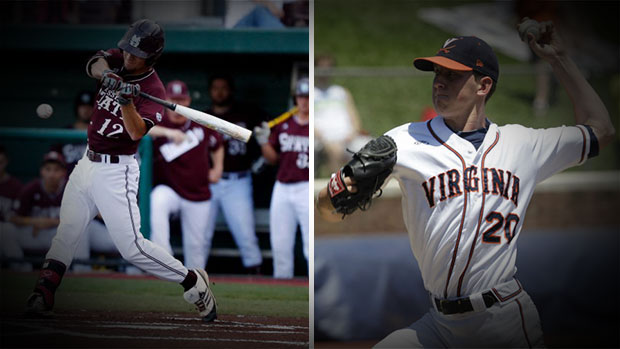 The Virginia Cavaliers and Mississippi State Bulldogs have never captured the NCAA championship title in Omaha, but following impressive showings in regional play, both teams are eager to capture that firs title as they square off against each other in the super regionals at Davenport Field in Charlottsesville, Virginia (home of the Cavaliers).

Virginia entered the NCAA tournament this season for the tenth straight year and are looking to advance to the College World Series for the third time in five years. After many years of falling just short of Omaha, the Cavaliers made their first appearance in the College World Series in 2009. Last season, as well as in 2010, the Cavaliers were ousted in the super regionals by Oklahoma, something Virginia first baseman Jared King plans on avoiding this time around.

“Those guys that have that bitter taste at the end of last year, losing on our home field, I know that they have a little extra motivation, if you even need it at this point.”

The Cavaliers cruised through regionals on the strength of their pitching, led by staff ace and ten-game winner Scott Silverstein along with Nick Howard and Brandon Waddell, as well as lock down relievers Josh Sborz and Kyle Crockett, who saved 12 games for the Cavaliers in the regular season.

The Mississippi State Bulldogs have attended the College World Series eight times in school history and last made the trip to Omaha in 2007 following an eight season absence dating back to 1998. This year’s Starkville Regional was the first time in ten years that the Bulldogs have hosted a regional, wherein they ousted a strong effort by Central Arkansas in four games to advance to super regionals.

“People who are really arrogant from the deep South or from the West Coast, they think that all the great players come from the deep South or Florida or Texas or the West Coast. Boy, is that not the case,” John Cohen said. “Brian’s done a great job, and his staff, of getting great players from the Northeastern corridor of the United States. They’re really good players, and there’s no question those kids can play.”

Mississippi State head coach John Cohen’s aforementioned comments illustrate the respect that is conveyed between the two teams, as they get ready to commence super regional play on Saturday.

The Bulldogs, led by 13th-overall draft pick Hunter Renfroe, and the Cavaliers, led by a a strong pitching core, are set to face off on Friday at 1:00 PM to start the super regionals. Game two will follow on Sunday at 7:00 PM, and if necessary, game three will commence at 4:00 PM on Monday.