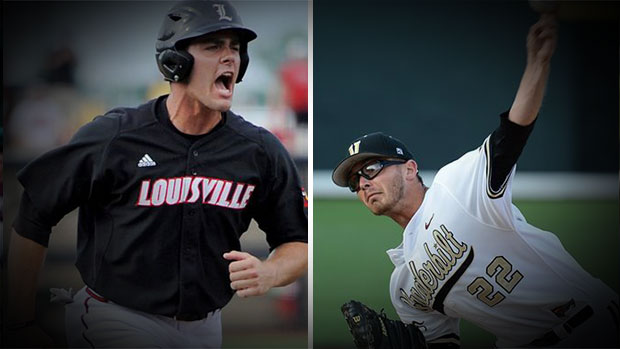 The rivalry between the Louisville Cardinals and Vanderbilt Commodores will come full circle on Saturday afternoon, as both teams face off in the first game of super regionals at Hawkins Field in Nashville, Tennessee, home of the Commodores.

Although both the Cardinals and Commodores have only appeared in the College World Series once before (the Cardinals in 2007, the Commodores in 2011), the two rival teams have faced each other in the NCAA tournament in three of the past five years.

Following years of both regular and post season match-ups that have been highlighted by dramatic showdowns, the rivalry has even spawned what is known as the “Battle for the Barrel,” a annual game that is held between each team where the winner brings home a bourbon barrel (Vanderbilt has brought the barrel back each year to date).

It is a rivalry that has seen the Commodores dominate, winning 22 of the 26 contests between the two teams.

Following a relatively easy go-around in the regionals (despite a 5-0 loss to Georgia Tech), Vanderbilt is ready to set course on their goal of winning it all in Omaha. Coming into NCAA Tournament play with a 48-7 record, the Commodores spent much of the second half of the spring as the top ranked team in the nation.

The Vanderbilt squad is comprised of some of the best college level talent in the country, such as their starting pitching. Kevin Ziomek and Tyler Beede have been one of the most effective one-two punches this season, garnering an impressive 25 combined victories this spring. In 16 starts, Ziomek posted a 1.92 ERA and a 111/38 strikeout to walk ratio in 112.1 innings of work this spring, while Beede posted a perfect 14-0 record and 2.20 ERA in 98.1 innings of work en route to being named a finalist for the Golden Spikes Award (the top player in college baseball).

On offense, the Commodores have been led by the likes of infielder Tony Kemp and outfielders Connor Harrell and Mike Yastrzemski. Kemp has provided speed, great defense, and superb hitting this spring, batting .398 with 33 RBI. Harrell and Yastrzemski have provided big bats to the lineup, combining for 15 home runs and over 100 RBI, each batting well over .300 on the season.

After ousting a solid Oklahoma State team by a score of 12-3 to secure the Louisville Regional Championship, the Cardinals enter super regional play with a determination to build off of the strong campaign put up by Louisville in 2007 (their only Omaha appearance), as explained by Louisville head coach Dan McDonnell:

“I think you want to add your chapter to the success that is happening here, but you like to be challenged. These guys talk about 2007 a lot because that team went to Omaha, so, you know, I tell them my story. I tell them what it’s like when I go back for all the alumni weekends knowing that I was a part of the team that played in Omaha, and no one can take that away from you. I just think it is a fun, healthy challenge that these guys want to put themselves in that 2007 category, and who knows, maybe even better than this.”

Louisville will attempt to oust their rivals in three games, en route to their second trip to Omaha in school history. However, Vanderbilt will not lay down without a fight, something many teams have witnessed throughout as season in which the Commodores have dominated college baseball.

Game one is slated for Saturday at 3:00 PM, while game two will commence at 4:00 PM on Sunday (and if necessary, game three will be played on Monday at 7:00 PM).