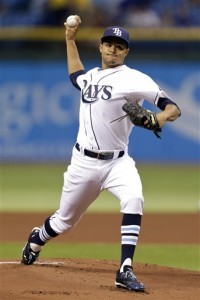 Tampa Bay Rays starter Chris Archer  turned in seven strong innings allowing two hits and one run and Desmond Jennings is a two run homer in the bottom of the seventh to lead Tampa Bay over the Baltimore Orioles 2-1.

Joel Peralta  pitched a scoreless eighth inning and Fernando Rodney recorded his 13th save of the season striking out two in the ninth to preserve the win.

Archer (1-1) limited the Orioles to Manny Machado‘s third-inning RBI single and Ryan Flaherty‘s fifth-inning double in his second start of the season. Archer began the season at Triple-A Durham and allowed five runs and seven hits in eight 5-0 loss to Cleveland last weekend his first major-league start of 2013.

Jason Hammel  Allowed two earned runs as he pitched into the seventh inning in the loss for Baltimore.

David Price threw from the mound for the first time since being placed on the 15 day disabled list with  strained triceps.  Price threw 38 pitches  and said after the workout he felt good.  Price will now get two days of rest before throwing another bullpen and then a decision will be made about a rehab assignment.