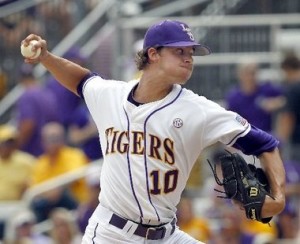 LSU  now leads the best-of-three series 1-0  in the NCAA Baton Rouge super regional. LSU (56-9) can advance to the College World Series with one more win either on Saturday or Sunday over Oklahoma (43-20)

Nola (12-0) struck out six and didn’t walk a batter to help LSU snap Oklahoma’s winning streak at eight and Gray (10-3), picked third overall by Colorado on Thursday in the Major League Baseball draft, allowed two runs on five hits through 7 1-3 innings. He struck out nine and walked two.

The two teams had a combined eight players who have been selected in the first 10 rounds of the 2013 MLB draft.