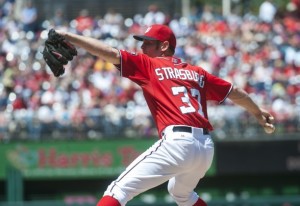 Washington Nationals ace Stephen Strasburg was placed on the disabled list due to the lat strain that forced him to end his last outing early after just two innings.

“There’s still some tenderness and discomfort there,” manager Davey Johnson said. “So we’re going to keep him off the mound for a few more days.”

Strasburg joins Bryce Harper and fellow starter Ross Detwiler  on the disabled list. Strasburg is 3-5 with a 2.54 ERA.