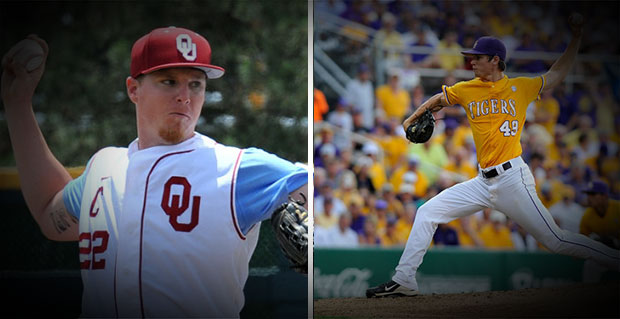 LSU and Oklahoma cruised through their respective regionals with relative ease and are ready for their match-up in super regional play, wherein the Tigers will host the Sooners on Friday at Alex Box Stadium in Baton Rouge, Louisiana.

When it comes to NCAA Tournament experience and performance, the LSU Tigers are quite the heavyweights, boasting an NCAA-best career winning percentage of .726 (130-49) in tournament play. Coming off of a regular season in which they posted a 55-9 record, the Tigers have gone on to capture the SEC Championship and breeze through the first round of tournament play, and are on pace to appear in their 16th College World Series, having last attended in 2009 when they won their sixth title in school history.

In sending LA-Lafayette home in a 5-1 victory on Monday, the Tigers flexed their muscles and displayed their offensive mite, led by Freshman of the Year Alex Bregman’s solo homer and two RBI and the rest of an explosive lineup (five LSU players were named to the All-SEC First Team, a school record).

Oklahoma, on the other hand, has a dangerous starting rotation led by Jonathan Gray and Dillon Overton, both top rated prospects in Thursday’s MLB Amateur draft. To go along with their plus rotational depth, the Sooners boast a decent lineup led by Matt Oberste and Max White (a lineup similar in talent and depth to that of South Carolina, devoid of a clear-cut star player, but a strong collaborative effort nonetheless).

By ousting the Tigers, Oklahoma will advance to their 11th College World Series in school history and first since 2010. The Sooners were last NCAA Champions in 1994, nearly 43 years since their first title in 1951.

Staff aces Jonathan Gray and Aaron Nola will square off on Friday to commence super regionals. LSU head coach Paul Mainieri had this to say in preparation for Friday’s match-up:

“Nola’s going to go against Jonathan Gray,” Mainieri said. “Gray’s going to be the No. 1 pick in the draft. A lot of people think he’s the best pitcher in the country. For us to have our best chance to beat him, we’ve got to go with our best.”

Both clubs will certainly have to play their best, as each are determined to reach the College World Series. Game one will commence at 7:00 PM on Friday at Alex Box Stadium (to be followed by game two at 7:00 PM on Saturday, and if necessary, game three will be played at 7:00 PM on Sunday).