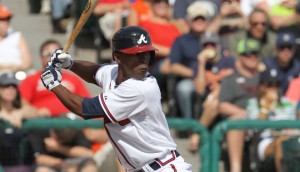 Chris Davis hit his 20th home run for Baltimore, Domonic Brown his 16th for Philadelphia and B.J. Upton hit his fifth for Atlanta to headline today’s highlights in the Major Leagues.

Yu Darvish was solid again for Texas, but got a no decision in the Texas  Rangers win.

Here are recaps and highlights of today’s major league games,

Detroit 2 Baltimore 4 – Rookie Kevin Gausman turned in his best performance as a major leaguer pitching six innings and allowing just one earned run while striking out four and got support from Chris Davis who hit his major league-leading 20th home run to spark a three-run seventh inning for Baltimore.  Prince Fielder homered and scored both runs for the Detroit Tigers. Rick Porcello took his first loss of the season.

Seattle 0  Minnesota 10 – The Twins got home runs from Josh Willingham, Brian Dozier and Ryan Doumit and Scott Diamond  combined with the Minnesota bullpen to shut out the Seattle Mariners 10-0.  Jeremy Bonderman  took the loss for the Mariners allowing seven earned runs in 4 2/3 innings of work.

Kansas City 1  Texas 3  Yu Darvish Pitched seven shutout innings and Jurickson Profar  in his second home run of the season in the bottom of the eighth and the Texas Rangers edged the Kansas City Royals  3-1.  Ervin Santana pitched well for Kansas City, going seven innings and allowing no earned runs and striking out five,  of the Kansas City offense could not provide him with any run support.

Houston 5   Los Angeles 4- Carlos Pena and Carlos Corporan homered against C.J. Wilson, and Jordan Lyles turned in his fourth impressive outing in a row for the Astros, who beat the Angels 5-4

Cincinnati 4   Pittsburgh 5 – The Pittsburgh Pirates rallied to beat the Cincinnati Reds 5-4 when Travis Snider delivered a single in the bottom of the 11th inning  to score Russell Martin from second base.  Pedro Alvarez and Garrett Jones hit home runs for Pittsburgh

San Francisco 4   St. Louis 2 – Brandon Belt delivered a two-run pinch-hit double to lead San Francisco to a 4-2 win over the St. Louis Cardinals. Buster Posey had four hit for the Giants. Sergio Romo recorded four outs for his 15th save of the season.

Arizona 8 Chicago 4  Patrick Corbin Wasn’t as good as he has been but still delivered six innings of four-run baseball and picked up his ninth win of the season 8-4  over the Chicago Cubs.  Edwin Jackson fell to 1-8 on the year with the loss.