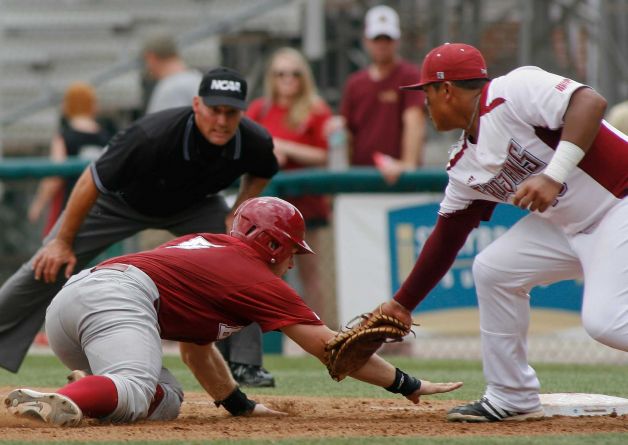 Regional tournament play entered its third day on Sunday, where teams facing double elimination would have their final shots at remaining in the NCAA Tournament. Those teams would have little rest, having to play the number one seeded teams within their region in the regional championship game that decides which team moves on to Super Regionals.

Day Three saw many of the same upsets that occurred on day one, as notable number two seeds Alabama, Clemson, Miami, and Ole Miss were all sent home. Alabama held onto an 8-5 lead heading into the ninth inning before surrendering four runs and the game to Troy.

Similarly, Ole Miss looked lost in their 4-1 loss to William & Mary, as their solid offensive lineup failed to show up when it mattered most.

Below are scores and highlights from Day Three of regional play. Stay tuned for additional insight and scores in the coming days as Super Regionals are around the corner.

Rice 0, Oregon 11 – Rice and Oregon will face each other again on Monday in the Eugene Regional Championship.

Troy 4, FSU 11 – A seven-run fourth inning capped by a Brett Knief grand slam would cement the victory for FSU, who in sending underdog Troy home will face Indiana in Super Regionals play.

William & Mary 2, NC State 9 – NC State would roll in the Raleigh Regional Championship behind Tarran Senay’s three-run homer and 5 RBI, ousting William & Mary 9-2. The Wolfpack will face either Oregon or Rice in the Super Regionals.

Elon 3, Virginia 11 – A six-run third inning and a strong relief appearance by David Rosenberger would highlight Virginia’s Charlottesville Regional Championship victory over Elon. Virginia will face either Mississippi State or Central Arkansas in the Super Regionals.

Kansas State 4, Arkansas 3 – A poor regional showing for the Razorbacks was highlighted on Sunday, as they blew a three-run lead to Kansas State and were ousted from NCAA tournament play. Kansas State will face Oregon State in the Super Regionals.

Oregon State 6, Texas A&M 1 – Beavers starter Ben Wetzler was superb in a complete-game victory against Texas A&M, leading Oregon State into the Super Regionals where they will face Kansas State.

LSU 5, LA-Lafayette 1 – Alex Bregman and Raph Rhymes led the Tigers offense in their 5-1 victory over LA-Lafayette in the Baton Rouge Regional Championship. LSU will face Oklahoma in the Super Regionals.

UCLA 6, San Diego 0 – Grant Watson pitched seven scoreless innings, surrendering just one hit in the Bruins’ 6-0 shutout of San Diego, as UCLA advances to the Super Regionals where they will face either Cal State Fullerton or Arizona State.