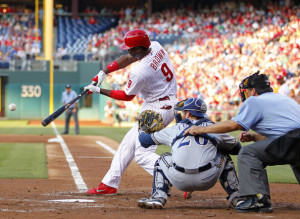 Coming off of three straight losses and a stretch in which they lost six of nine games, the Philadelphia Phillies rebounded on Sunday afternoon in a 7-5 victory over the Milwaukee Brewers.

The Phillies were led by a strong pitching performance by staff ace Cliff Lee and the hot, slugging bat of Domonic Brown, who have both provided a sense of stability in a mediocre season for Philadelphia.

Lee pitched 7.2 innings, surrendering three (two of those coming on a Jonathan Lucroy three-run triple following his departure in the eighth) on seven hits and striking out a season-high 11 batters, while walking none.

Lee registered 17 first-pitch strikes and struck out eight batters by way of swinging strikes. On the season, Lee improved to a 7-2 record and 2.45 ERA, along with a strong 74/13 strikeout to walk ratio in 88.1 innings of work.

As for Brown, the power-hitting left fielder went 3-for-3 with four RBI, highlighted by a three-run home run in the bottom of the first inning. Brown would follow up in the second with an RBI triple, scoring Jimmy Rollins and extending the Phillies lead to 7-0.

Brown has been white hot as of late, slugging seven homers and driving in 13 runs in his past eight games. His first inning blast would be the 16th of the season and good enough for the NL lead, while his four RBI would increase his season total to 40, fifth best in the league.

Despite a shaky performance by the Phillies bullpen in the last two innings, wherein Milwaukee score all five of their runs, Philadelphia was able to pull out the victory. The Phillies sit third in the NL East standings, three games from .500 with a 27-30 record.