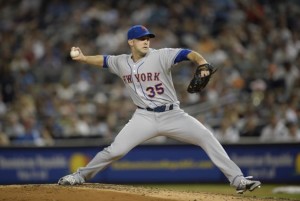 Dillon Gee struck out a career-high 12 and held the crosstown rival Bronx Bombers to four hits, pitching into the eighth to lead the New York Mets to a 3-1  win and a four-game season sweep of the New York Yankees.

The Yankees have now lost five straight. The Yankees began the week leading the AL East at 30-20. Vidal Nuno took the loss for New York.

Gee (3-6) had not thrown more than five innings in any of his previous five starts and carried a 6.34 ERA into Thursday night’s start, and struck out six of the last seven hitters he faced.

Manager Terry Collins was very frank in his assessment of key in a pre game  press conference.

“Right now, he’s one of our five guys in the rotation,” Collins said. “If he doesn’t pitch good, we’ve got to find somebody to take that spot. Any time you go out there, if you can’t get people out, we’ve got to find people to replace you.