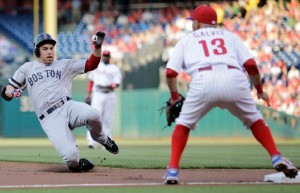 The Boston Red Sox pounced on Philadelphia Phillies pitching with four runs in the first inning and Jacoby Ellsbury set a team record with five stolen bases as the Red Sox beat the Phillies 9-2.

“Single-handedly, he changed the game,” Boston manager John Farrell said of Ellsbury. “When you have that kind of base-stealing threat, it’s a huge asset.”

Struggling to score runs in the past two games, the Red Sox had 14 hits off  Philadelphia pitching.

Jarrod Saltalamacchia doubled twice and drove in three runs. Jose Iglesias was 2 for 5 with an RBI double.

The Red Sox  got started early with Ellsbury led off with a single and went to third when Daniel Nama singled to center field. Elsberry then scored when Dustin Pedroia grounded out to second base.

After Stephen Drew struck out, Saltalamacchia lined a double down the line in right field and two runs scored.  Johnny Gomes and David Ortiz hit solo home runs for the Red Sox.