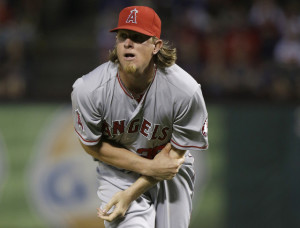 After fracturing his non-pitching arm elbow while dodging a line drive on April 7 against the Texas Rangers, Angels ace Jered Weaver threw a simulated game this past Friday in which he threw 80 pitches over four innings.

Weaver suffered no issues or setbacks and is scheduled to start an extended spring training game on Wednesday. Los Angeles will require Weaver to start at least two rehab assignment starts before rejoining the Angels starting rotation. If all goes well, Weaver is set to return to the rotation come early-June.

Coming off of a strong 2012 campaign in which he posted a 20-5 record with a 2.81 ERA and 1.02 WHIP, Weaver looked to bring such success over into 2013. Despite a mediocre spring training where he posted a 5.40 ERA in four starts, Weaver pitched efficiently in his first start of the regular season.

In that opening day start against the Cincinnati Reds, Weaver pitched six innings, surrendering one run on two hits while striking out four batters. Though the start was logged as a no-decision for Weaver, the Angels were able to pull off a 3-1 victory over the Reds.

Weaver would struggle in his next start, surrendering five runs on seven hits over five innings of work in a 3-7 loss to the Texas Rangers. It would be in this game that Weaver would suffer the injury that has kept him out of the rotation for over a month and a half.

A return to the rotation may be the spark needed to turn around a struggling Angels club who sit 12 games behind the AL West leading Texas Rangers with a 17-27 record.

The Angels own the third-worst team ERA (4.77) in the AL, while veteran sluggers Albert Pujols (due to an injured foot and sore knee) and Josh Hamilton have performed well below usual expectations.

While Weaver is only one person, his return to the rotation will be much anticipated by the Angels. A poised and successful staff ace not only relieves pressure off of the offense, but also that of the bullpen. At the current moment, such relief is much needed by the Los Angeles Angels.