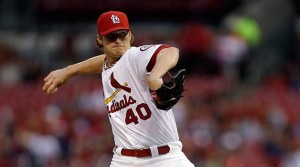 TheSt. Louis Cardinals starting pitcher Shelby Miller has had a rookie season to remember. Nearly two months into the 2013 season, Miller has not only pitched his way to recognition as one of the premier rookies in the game, but also as one of the most dominating pitchers in either league this season.

A first-round draft pick (19th overall) in the 2009 MLB Amateur Draft by the St. Louis Cardinals, Shelby Miller has been a perennial top prospect for the past three seasons following solid performances at A, AA, and AAA levels of the St. Louis farm system.

St. Louis was careful in their grooming of the young starter, slowly bringing him up through each level and ensuring that Miller was not rushed in his development.

Following an inconsistent 2012 season at Triple-A Memphis where Miller posted a mediocre 4.74 ERA through 136.2 innings, the Cardinals organization  could not have expected Miller to have as much success as he’s had this season.

A successful start (first of his career) on October 3, 2012 where Miller worked six scoreless innings of one-hit baseball with seven strikeouts, coupled with a strong spring training can be attributed to Miller being given the final spot on the St. Louis rotation, a decision that the Cardinals can look back on with a sincere smile.

Originally drafted for his plus fastball, strong mound presence, pitch command, and projection as a front-end rotation starter, Miller has been all of that and more for the Cardinals this season.

In eight starts, Miller has a 5-2 record and a 1.40 ERA in 51.1 innings, along with a 57/12 strikeout to walk ratio. Such numbers are not only impressive, but also historical upon closer look.

Miller is the third pitcher, and first since Fernando Valenzuela in 1981, in the history of MLB to allow eight or less earned runs in their first nine career starts.

Miller’s complete-game, one-hit shutout against the Colorado Rockies on May 10 was the first time since John Lackey in 2006 that a pitcher surrendered a hit to the first batter and retired all 27 batters that would follow.

Although the season is still young and Miller has only made eight starts, his pitching performances thus far have garnered him serious attention for ROY honors. If Miller can keep at this pace, he will be leading the NL Central leading Cardinals into the playoffs and will be amongst the elite few who will be considered for NL Cy Young honors.