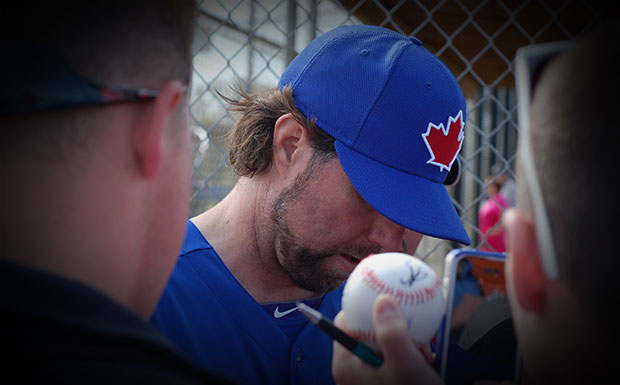 After two base hits in the first inning with nobody out Boston’s Jarrod Saltalamacchia  came through with a base hit an RBI to right field. The second run came around to score when a Dickey knuckleball bounced away from catcher J.P. Arencibia, which allowed Jackie Bradley Jr. to trot in from third.

Dickey finished his second inning of work thanks to an  inning ending double play. Dickey was charged with both runs on four hits and one walk while throwing 24 of his 34 pitches for strikes.

“Today was just, ‘How does it feel out of your hand with your adrenaline going, off the slope of the mound, in a game situation,’ and I was really pleased,” Dickey said. “I threw a lot of strikes, I was 0-2 or 1-2 on about 70 or 80 percent of the hitters, and that’s always a good sign for me.”

Wright finished two innings of work allowing just two hits and striking out three. Wright threw  25 of his 40 pitches for strikes and allowed just one batter to reach scoring position.

More Blue Jays News: Ricky Romero will make his first start of the Grapefruit League season when the Blue Jays play host to the Twins on Tuesday at 1:05 p.m. ET at Florida Auto Exchange Stadium.

The Middleby Co. Given Average Rating of “Moderate Buy” by Analysts