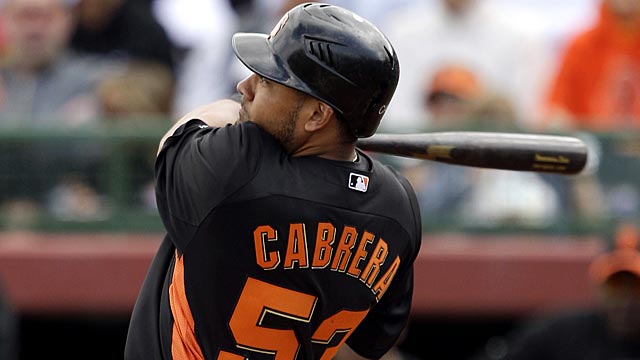 I am a fan of the team and will cheer for anyone on the roster.  For the past three seasons, management has put on the field a team that brought the first two World Series Championships in the San Francisco Giants era.

But as of today, I am mad at the San Francisco Giants.

Upon seeing that the Giants will actually be giving Melky Cabrera a World Series ring for his PED-shortened “contribution” to the team, I was genuinely mad. In a pure public relations move, Cabrera withdrew his candidacy for the batting crown – ultimately won by Buster Posey – because he “wanted to give it to someone deserving.”

So Cabrera made himself ineligible for the batting title but wouldn’t think twice about taking a World Series ring?  Cabrera says he didn’t deserve the batting title, but the Giants think he should be rewarded for the entire season AND post-season?  What is wrong with this picture?

From an organization that continually does what is right in baseball sense, the team has failed big-time on this issue.  What exactly did Cabrera do to deserve the ring?  The Giants were a middle-of-the-road team in the first half WITH Cabrera in the line-up, but dominated in the second half of the season with him getting the PED’s out of his system and attempting the stupidest cover-up of a baseball “crime” in history.

Hell, we didn’t even think enough of him to bring him back for the playoff run after his 50 game suspension was finished.  And this is from a team that welcomed Guillermo Mota back with open arms after a 100 game suspension for a banned substance!!!!  The team brought in class acts like Hunter Pence and Marco Scutaro at or near the trade deadline, and the rest is history.

Pence and Scutaro should get HALF of Melky’s ring, in addition to their own.

But I’m not mad at Cabrera.  I’m a firm believer in second, third and fourth chances, as long as management feels they are worthy.  The Giants even took a chance on Darryl Strawberry back in the day, and everyone on the planet knew how THAT would turn out.

I’m mad at the Giants for not taking a stand against giving Cabrera a ring.  If he did not get a ring, what’s Melky going to do?  Complain?  If he complains, the fresh-start he’s been given by the Toronto Blue Jays would start off in a negative fashion – not exactly the quiet start he wants.  Are the Giants afraid of the MLB Players Association filing a grievance?  I think there’s more than enough evidence to support the team’s desire not to give him a ring.

When there is a reunion of the 2012 World Series Champions in the year 2022, will Cabrera be invited?  I can go on record and say absolutely NOT.  So if he’s not even welcome at an reunion game, he shouldn’t bear the ring of a miracle season that he was only a minor part of … not to mention it was all illegal in baseball terms.

In a bit of good news, NO MORE “MELK-MAN” OUTFITS.

That alone may deserving of a ring.