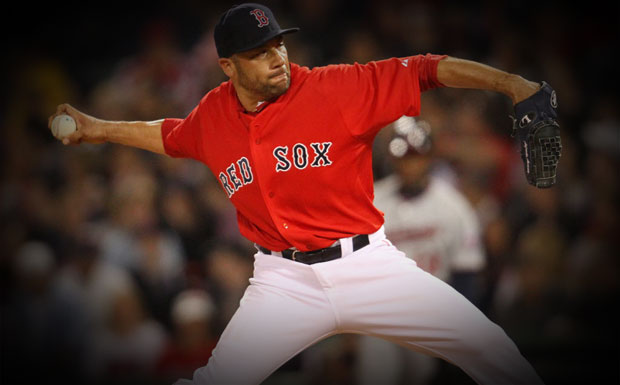 Just in case anyone was wondering Boston Red Sox reliever Alfredo Aceves is still Alfredo Aceves. Yesterday during a live batting practice, where pitchers are supposed to actually throw, Aceves nonchalantly tossed in a few pitches. New manager John Farrell asked if he was all right. Aceves eventually turned it up a bit after discussion with new pitching coach Juan Nieves.

A source indicated Sunday that the Sox believed that Aceves was testing new manager John Farrell. Speaking with reporters after yesterday’s workout, Farrell said, “He didn’t go through the drill as intended, and we’ve addressed it.”

Now is the time for the team and Cherington to part company with the talented but temperamental righthander. Boston has made an extraordinary effort to distance themselves from the dysfunction of the 2012 season. For some reason Aceves made it through the cleansing of what former Red Sox outfielder Carl Crawford described as a “toxic” environment. Aceves provided much of the toxicity.

Aceves has a history of issues with the Sox, dating back to last season when he once refused to hand the ball to Bobby Valentine on the mound. Later in the season, upset at not being called on in a save situation, Aceves had an angry confrontation with Valentine in his office that resulted in the pitcher slamming the door and later receiving a three-game suspension.

Perhaps even more curious is why Cherington did not control the situation last year. Aceves has trade value. Apparently 2012 was not the year to deal with the petulant Aceves. The question isn’t if Aceves will act out again, it is when, so why not set a precedent now and establish a zero tolerance policy and get rid of him.

Farrell was quoted as saying, “What took place last year, I can’t speak to firsthand. I can get some background on some certain situations, but I think it’s important . . . not only for Alfredo but every other guy in our clubhouse, (that) we build that relationship and earn that trust along the way. That’s critical.”

Aceves may very well flourish on another team, but Cherrington can’t concern himself  with that possibility. If the team is truly distancing itself from a disastrous 2012 Aceves has to go and go now.